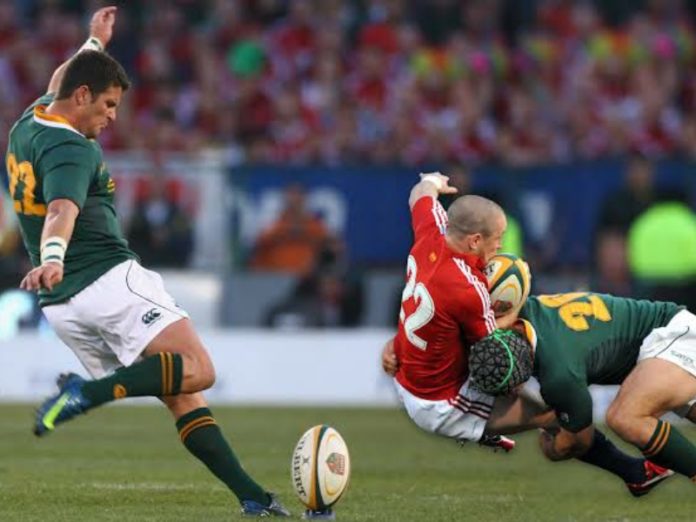 Studio experts predicted the Sigma Lions would lose by at least 40 points, or maybe as many as 50 points. Lucky’s guess was B&I Lions by 30 points.

As it turns out, they were right and Lucky was wrong. A final score of 14-56 is certainly an indicator that the men in red are not only here to play – they are also here to win.

While many people questioned the ability of the visitors to handle the altitude, they dispelled that question mark in grand style.

At the final whistle, the local guys were gasping for air. Clearly they had run their feet off.

What is particularly impressive, is the way they scored their eight tries – with four of them coming from wing debutant, Josh Adams.

Crossing the try line close to the touchline every time, indicates that they were classic wing-tries.

But the hard work was done by the mighty B&I forwards in the set phases and the tight-loose. As expected the Sigma Lions were under great pressure all the time.

They’re a great outfit. There’s no doubt about that. So, the Springboks should be fearful, right? Wrong!

Coach Jacques Nienaber can (and will) watch the eight tries scored by the B&I Lions with interest, but he will be watching the two tries they conceded over and over and in super slowmo.

Test matches are won not only by points scored – they are also won by the points denied.

Does it mean anything that the B&I Lions have conceded three tries in two matches (one of them against Japan) and the Springboks didn’t look like conceding any tries against Georgia?

If the Sigma Lions could score what were two soft tries, what will the visitors do about stopping the rampant Springbok loose forwards around the scrum?

And then there is another defensive challenge for Warren Gatland. Give Cheslin Kolbe, Makazole Mapimpi or Rosko Specman a bit of space to manoeuvre and who in the world can stop them?

Gatland still has a lot of work to do, but he has some quality game time ahead (facing the Sharks and the Bulls) before the first test on 14 July in Cape Town.