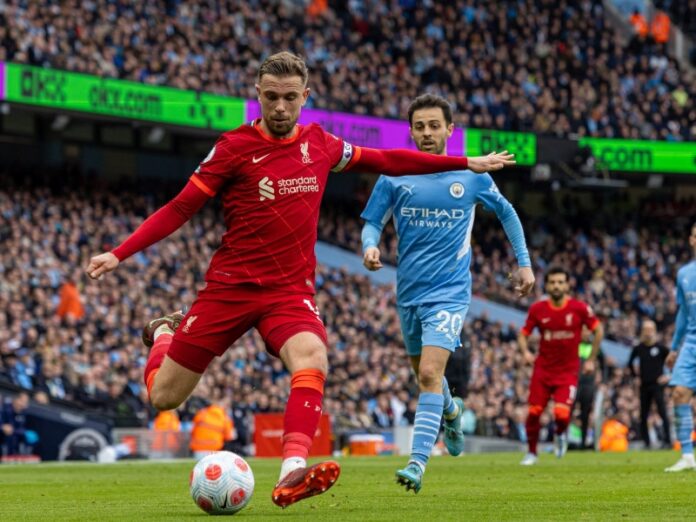 After 90 minutes of superb football, Manchester City and Liverpool emerged as equals in a game which had been billed as the “title decider” between the Premier League’s top two.

The visitors Liverpool drew 2-2 with league leaders Manchester City at the Etihad on Sunday.

The hosts started brilliantly with Kevin De Bruyne putting them in front after just five minutes. Diogo Jota levelled matters minutes later before Gabriel Jesus beat the Liverpool offside trap to give the Cityzens the lead before the break.

The Reds were fired up in the second half and birthday boy Sadio Mané combined well with Mohamed Salah as Jurgen Klopp’s side equalised yet again.

Brazilian goalkeepers Alisson and Ederson made two saves a piece as both sides had their fair share of opportunities to win the match. Raheem Sterling also found the back of the net before being denied by VAR by the barest of margins.

City will no doubt be the happier side, with a draw keeping them on top albeit by just a single point. Klopp’s team can dream of a quadruple, though, with their fighting presence in all competitions keeping the hope alive.

“It was like a boxing fight – you put your arms down for a second and you get a massive knock,” Klopp said post-match.

“We could have done better but we did a lot of moments really well. The intensity of the game was crazy. We meet again in six days – it was good fun. I liked it!”

The two clubs will meet in the FA Cup semi-final next Saturday after their crucial Champions League quarter-final second legs against Atletico Madrid and Benfica in midweek.