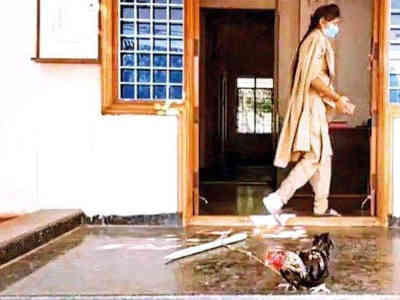 A rooster, which had been fitted with a knife before an illegal cockfight, inflicted deadly wounds to its owner’s groin.

Thangulla Satish died of blood loss before getting to hospital. Pictures of the rooster being detained at the police station have since gone viral on social media. The rooster was later transferred to a local farm in the southern Indian village of Lothunur.

The incident, which has made global headlines, has sparked a manhunt for the organisers of the cockfight.

Local police officer B Jeevan said: “We are searching for the other 15 people involved in organising the illegal fight. They could face charges of manslaughter, illegal betting and hosting a cockfight.”

Jeevan said the rooster will be kept safe for the time being. “We may need to produce it before the court,” he said.

Despite being outlawed in India since 1960, the cruel sport is still common in the rural areas of Telangana, Andhra Pradesh, Karnataka and Odisha states – particularly around the Hindu festival of Sankranti.

Blades of up to 8cm are tied to the talons of the rooster before it is made to slice another cock to death while punters bet on the winner.

Thousands of roosters are killed every year in these battles.