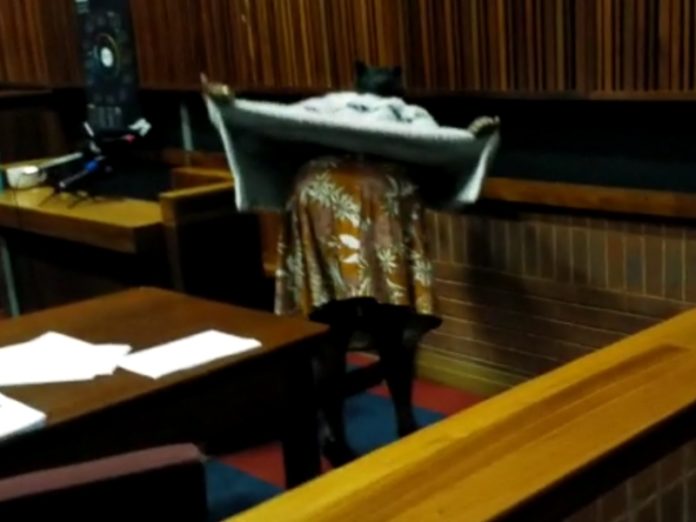 In October last year I got stuck with the alleged serial killer Rosemary Ndlovu when the door we were supposed to go through with the police at the Johannesburg High Court wouldn’t open.

On Tuesday 14 September, nearly a year later, the former police sergeant showed me her backside during lunch break at the Palmridge High court when she saw that I was filming her.

After bending over in my direction, I walked tentatively over to her and we had a short chat in the court gallery.

As I approached her, Rosemary noticed that I was filming her and, to my surprise, she bent her back to me with a wide smile on her face.

I wanted to see if she remembered that day we were stuck in a room together at the Johannesburg High Court. She did.

“Wena, you are always following me neh?” She asked.

“I remember you from the days when the case was sitting at Tembisa regional court.”

“What’s wrong with you,” she smiled, as though she wasn’t on trial for murder.

Afterwards, she sat in the box waiting for the second half of her hearing to begin. She was being questioned by advocates about the evidence given by 56 witnesses who have so far testified against her.

During the proceedings, Rosemary was seen smiling from the box despite the nature of the questions she was being asked for most of the morning.

She only lost her temper momentarily when the judge had to repeatedly remind her that she was to only answer in response to what witnesses had testified against her.

In the numerous court hearings I have attended since Rosemary Ndlovu’s case began, there is one thing that has consistently stood out.

She is always dressed to kill, her hair is well done and she always maintains a sunny and composed exterior.

Rosemary was arrested on 07 March 2018. After starting at the Tembisa regional court, Ndlovu’s case is in the High Court sitting at Palmridge, where her trial is currently underway.