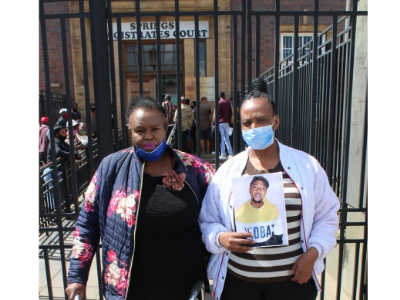 Family members and victims feel that bouncer Jabu Radebe got off too lightly after he was sentenced to 15 and seven years in the Springs Magistrate’s Court on Monday.

On 4 September last year, Radebe who was a caretaker at a foreign-owned spaza opened fire on a group of residents who were allegedly looting shops in the area. Radebe shot and killed Pule Khanyi and Desmond Ngomani.

“He will one day walk out of prison and carry on with his life while my son is dead,” she said.

Thandi Mahlangu has three bullets lodged in her right leg and has lost the use of her legs.

“I am forced to live with this pain for the rest of my life while he still has functioning legs,” she said.

Thandi said the three victims weren’t part of the looters.

“The deceased was visiting his aunt, I was coming from work while Desmond was walking home,” she said.

“He continued shooting in my direction even when I was telling him I was not part of the group. I called out his name twice,” she said.

“He failed to send representatives to apologise on his behalf or financially help with the burial as per the African custom,” she said.

“After the shooting he collected 19 cartridges from the scene before handing himself over to the police. This shows he was trying to tamper with the evidence,” she said.