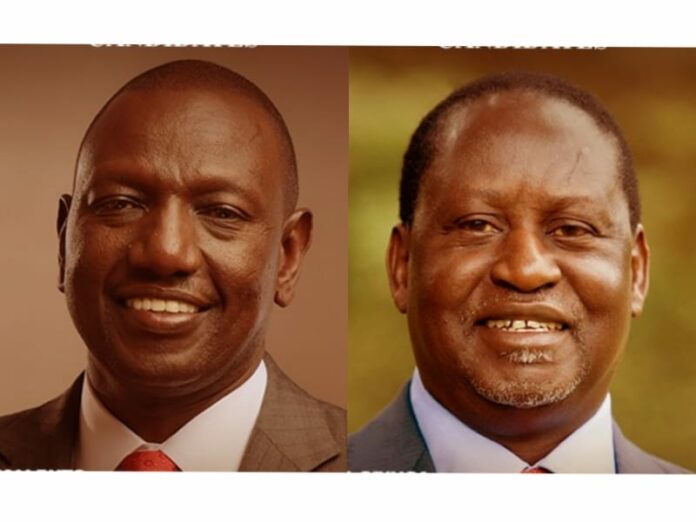 ELEPHANT EYE:  Sousa Jamba describes Kenya’s complicated politics in which President Kenyatta is campaigning against his own Vice President and supporting the son of his own father’s long-time rival

It was the great novelist Chinua Achebe who wrote that Nigerians speak about politics in the same way that the British go on about the weather. He could have been writing about Kenya. Wherever Kenyans gather the main topic is politics.

In 2003, I went to Kenya to try to understand the war in neighboring Somalia. I met Babafemi Badejo, a Nigerian academic at the time working as the UN representative for Somalia. He told me that Kenyan politics was perhaps the most interesting on the African continent because it was complicated and did not fall into an easy narrative.

Professor Badejo seems to have found Kenyan politics so interesting that he wrote a biography on Raila Odinga, who is a leading contender in the forthcoming elections.

Raila is the son of Oginga Odinga, who was the main rival to Jomo Kenyatta, Kenya’s first president and the father of Uhuru Kenyatta, the current president of Kenya.

Kenyatta’s vice president, William Ruto, is running against Raila Odinga in the 8 August elections, but he does not have the support of his boss. Kenyatta is telling Kenyans that they should vote for Odinga — a president rooting for his vice president’s rival!

Kenyan politicians keep moving from political party to political party. Party allegiance does not count much; what counts is the personality and the strength of his constituency on the ground.

In 2007, like many people, I watched in horror as the electoral contest between Mwai Kibaki on the one hand and Raila Odinga on the other resulted in massive post-electoral violence. At the time, Odinga’s deputy was William Ruto. Now Ruto and Odinga are pitted against each other.

I have several Kenyan friends who love discussing politics. Since I do not drink, while I was in Kenya I was often the driver for my friends who avidly frequented all the watering holes of Nairobi.

I realised then that Kenyan politics was essentially about personalities who had a hold on their communities of origin and would use this as a bargaining chip.

After all the posturing and finger pointing, Kenyan politicians would often reconcile and get on with governing — oftentimes not in the most ethical way.

John Githongo, a former journalist who eventually became secretary for governance, had to flee the country because he could not stand seeing ministers making fortunes through corruption. He was expected to keep quiet because of ethnic loyalty.

Kenyan politicians are rich; they need the money to keep buying the loyalty of their supporters. Odinga is a multimillionaire who was educated in the former East Germany. At one time he was such a fervent communist that he named his son Fidel after the Cuban revolutionary leader Fidel Castro.

I had a long discussion with my former student who told me that she was having a problem writing her novel because real life in Kenya was far more fantastic and captivating than anything she would ever write.

She was full of hope that the forthcoming elections would be peaceful and ethnicity would count for little because the main rivals (Ruto and Odinga) did not represent the usual Kikuyu-Luo rivalry. She also said that there was the Obama effect. Americans had voted for a Kenyan as president — surely Kenyans could vote for a fellow compatriot without taking his ethnicity as a prime factor.

I have to say, though, that Kenyan politicians are very accessible. Before becoming a born-again Christian, Raila Odinga used to frequent a nightclub for “watu wakubwa” (big people) in the heart of Nairobi. The cost of alcohol was quite high in that location, but we often fetched up there after my friends were well tanked up from cheaper watering holes.

Odinga loved Congolese music and when he would get down on the dance floor while wearing a flat cap everyone, including me, would dash off to try and imitate the steps of the great man. At 77, he is still a great dancer.

I also once met the current Kenyan president, Uhuru Kenyatta, at Paddington train station in London when he was trying to run for the presidency of the country after having been an MP and businessman.

Kenyatta introduced me to a shy teenager saying it was his son. He gave me a number (which I still have) and told me to call him when next I would be in Nairobi. After August, Kenyatta will no longer be president, and I might go to Nairobi for a chat to understand the complexity of that lovely nation.