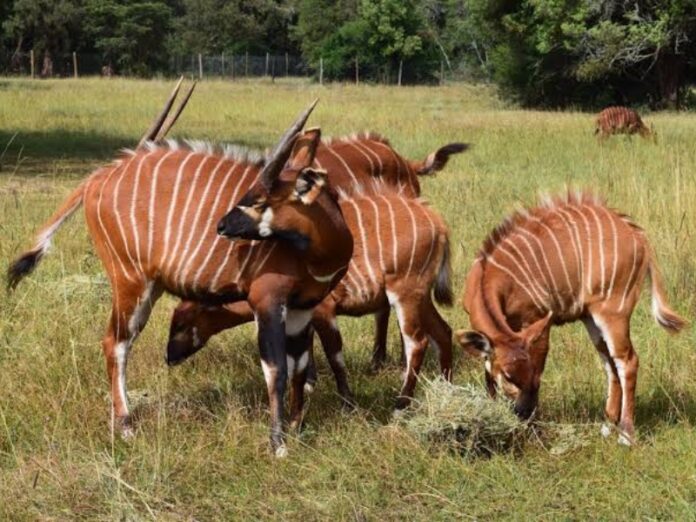 With fewer than 100 Kenyan mountain bongos left in the wild, the survival of the endangered animal received a massive boost as five were released into a sanctuary.

The mountain bongo, a large African antelope, is considered critically endangered. The International Union for Conservation of Nature said the animals will probably continue decreasing if there isn’t any action.

The bongo is a buck-like, mostly nocturnal animal. Bongos are characterised by a striking reddish-brown coat and black and white markings and long slightly spiralled horns. They are the only antelope in which both sexes have horns. A recent wildlife census reported that there are only 96 mountain bongos left in Kenya.

A total of 18 mountain bongos were brought back to Kenya from 14 different zoos in the United States.

Five of those were released in the Mawingu mountain bongo sanctuary on Wednesday.

The species roamed the regions of Kenya in large numbers but in the 1950s, its population rapidly decreased due to poaching, the wildlife trade, predation and disease.

“The real work now begins. We must ensure that the animals released can thrive and survive in the sanctuary and, eventually, the wild,” said Head of veterinary services at MKWC Dr Roberto Aruho.

“This is the culmination of dedicated conservation work that has spanned almost two decades. It marks the single most significant step towards the survival of the mountain bongo in history.”

Ten mountain bongos are planned to be released into the sanctuary each year in stages of five every six months.

By 2025, the sanctuary hopes to have 50 to 70 fully rewilded mountain bongos.

“The mountain bongo is one of Kenya’s most iconic animals, is critically endangered and can only be found in Kenya. The opening of the sanctuary is a critical step to help achieve the rewilding process,” said Najib Balala, Tourism and Wildlife Minister.

While it may take several years, the growth of the Kenyan mountain bongo is important for wildlife conservation not just in the country but in Africa as a whole.