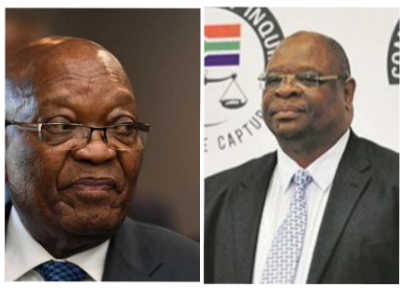 Jacob Zuma should be sentenced to two years in jail for contempt of court for blatantly refusing to appear at the state capture commission.

“Zuma’s behaviour is calculated to undermine the integrity of this court and the judiciary in general,” said the commission’s secretary Professor Itumeleng Mosala.

“This is no ordinary case of contempt.”

Two other criminal charges have already been laid against Zuma.

One for leaving the hearings without permission, and the other for failing to appear when summoned by the commission in January.

In an urgent application to the Constitutional Court filed on Monday, Mosala wrote that Zuma had intentionally and unlawfully failed to appear before Zondo on 15-19 February as the ConCourt instructed.

Mosala said Zuma also failed or refused to furnish the commission with affidavits about evidence about his role in corruption at Eskom and Prasa.

Nkandla’s most famous tea-party host also made statements that are injurious to the reputation of judges and the entire judiciary.

“Zuma should be sentenced to imprisonment for a term of two years for contempt,” wrote Mosala, who wants the apex court to order Police Minister Bheki Cele and National Police Commissioner General Khehla Sithole to, he said: “Take all steps as may be required to give effect to the order.”

After the Constitutional Court in early February ordered Zuma to appear, Zuma said: “It is also patently clear to me that I am being singled out for different and special treatment by the judiciary and the legal system as a whole.”

He said the commission into allegations of state capture can expect no further cooperation from him in any of the processes.

“If this stance is considered to be a violation of their law, then let their law take its course,” he said.