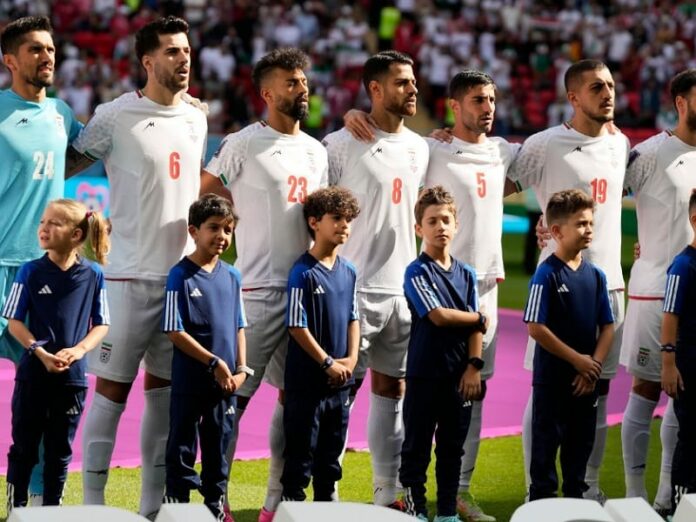 Several family members of the Iran national football team have been threatened ahead of their final group stage game against the United States.

The families were warned they could face imprisonment and torture if the players do not “behave” on Tuesday night, CNN reported.

Standing in solidarity with the women’s rights movement in the nation, the Iran players refused to sing the country’s national anthem during their Fifa World Cup opener against England.

However in their second fixture against Wales the players sang the anthem with reports suggesting the state warned there would be consequences if they refused again.

With tears streaming down the faces of both players and their supporters, an emotional Iran team sang the national anthem with boos ringing around the stadium

A source within the security team of Iran said several members of the Iranian Revolutionary Guard Corps (IRGC) had been monitoring each player.

“There are a large number of Iranian security officers in Qatar collecting information and monitoring the players,” the source said.

The same source said before the showpiece the Iranian government promised players presents and cars but following the protest, that had quickly changed to threats and warnings.

The regime is said to have hired several people to “support” Iran in the stadium during the group stage fixtures, with more set to be present on Tuesday night against the USA.

“In the last game against Wales the regime sent over hundreds of these actor supporters in order to create a false sense of support and favour amongst the fans,” the source said.

“For the game against the USA the regime is planning to significantly increase the number of actors into the thousands.”

Both Iran and the United States know a win would take them through to the round of 16. However a draw for Iran might be enough.

If England defeat Wales and Iran avoid defeat, their solitary win would be enough to advance to the knockout stages.

Pictured above: Iran players during their anthem