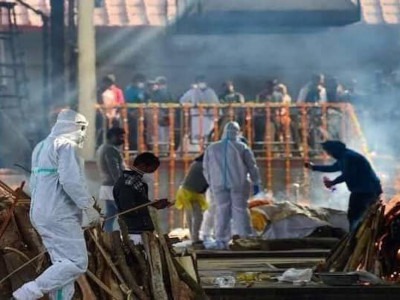 It marked the fourth day in a row that the country has set a world record for daily infections, and experts have predicted that the surge will last for weeks.

These figures are believed by epidemiologists to be the tip of a much larger iceberg, with the actual figures likely to be higher due to the country’s limited testing capacity.

Hospitals across the country have had to turn away patients because beds are running out and oxygen levels are critically low.

Dr Shahid Jameel, one of the country’s leading virologists, told the Sunday Times that in government hospitals, up to three patients share a bed.

In the southern state of Karnataka, families have been told by the government to bury or cremate victims of the virus in their own backyards.

This is the state of the country now, and it is a far cry from the confidence its government was showing last month, when Prime Minister Narendra Modi described the pandemic as being in its “endgame.”

Despite experts in the country having long predicted the onset of this disastrous second wave,  the focus of Modi’s government until last week had largely been on securing victory in four of India’s states which are holding elections.

Amit Shah, Modi’s right-hand man and the Home Minister, spent the first 18 days of April on the campaign trail, holding crowded, unmasked, un-socially distanced rallies up and down the country.

The country’s exportation of vaccines has also nearly ground to a halt.

The Serum Institute of India, from whom South Africa once purchased 1.5 million doses of the AstraZeneca vaccine, has been forced to halt on commitments to other countries.

This includes exports to countries participating in the COVAX initiative, which aims to provide vaccines to many African countries. These countries counting on India to provide them with vaccines now look on in dismay.

Pakistan and the US have offered to assist India by sending emergency medical supplies.