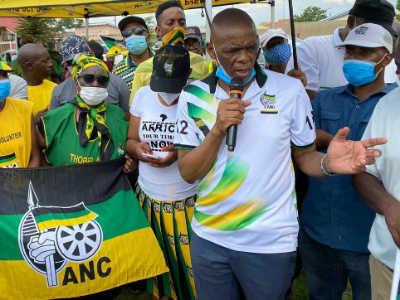 Ace Magashule has dared ANC National Executive Committee members who are loyal to President Cyril Ramaphosa to try and remove him from his position of party secretary-general.

In an exclusive interview with Scrolla.Africa, Magashule said: “This is a war, and I will not back down. I will fight until the bitter end.”

The ANC NEC, the party’s highest decision-making body, met virtually this weekend but the meeting ended abruptly after some NEC members called for Magashule’s axing in line with the ANC’s step aside policy.

But Magashule’s NEC allies jumped to his defence.

“The ANC does not belong to an individual. It belongs to the branches,” said Magashule.

Magashule faces charges that could potentially end his political career, stemming from the R255 million asbestos tender issued during his time as premier of the Free State.

Magashule said that the integrity commission, chaired by party stalwart George Mashamba, should not be a weapon to eliminate political opponents.

The commission recommended he should step aside.

This is in line with ANC policy that party members who are facing criminal charges should step aside.

Scrolla.Africa has learnt from three independent sources that Magashule accuses Ramaphosa of targeting him.

“Let’s allow the branches to talk. I was elected by the branches, and they are the only people that can remove me from my position,” he said.

Scrolla.Africa has learnt from three independent party sources in the NEC that Tony Yengeni was among the people who jumped to Magashule’s defence.

“It got heated that some members had to be called to order. This is the turning point in ANC government since the dawn of democracy,” said an NEC member who did not want to be named.