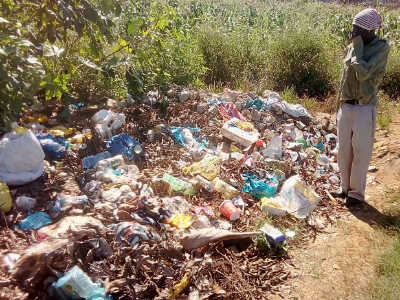 There was a time when the beautiful and clean entrance to the Dzindi Irrigation Scheme attracted people from far and wide to buy its agricultural products.

But those days have long gone.

These days the entrance next to Shayandima Township outside Thohoyandou in Limpopo is a no-go area as residents are turning it into a dumpsite.

There is a terrible stench of rotten garbage and even dead, rotting animals.

At the Tshidumbi River bridge residents dump garbage over the bridge as the river has become a dumping site – while the Thulamela municipal dump site is only a few kilometres away at Muledane.

The scourge of illegal dumpsites can be seen in almost all rural areas.

Mukosi Madilonga who stays close to an illegal dumpsite has called on the government to arrest and fine those responsible.

“These people come here, sometimes at night, and offload their rubbish next to our homes,” said Mukosi.

“This is a major health hazard. We want action or else we will be forced to take the law into our own hands.”

Matieni civic chairperson Michael Gumula said they are doing all to stop people from dumping their garbage in the area.

“We are appealing to whoever sees the culprits to report them so that they can be punished,” Gumula said.

“We ask the public to report incidents of illegal dumping and the culprits will face the full might of the law,” he said.

Madi indicated they will intensify public awareness as some people could be doing it out of ignorance.