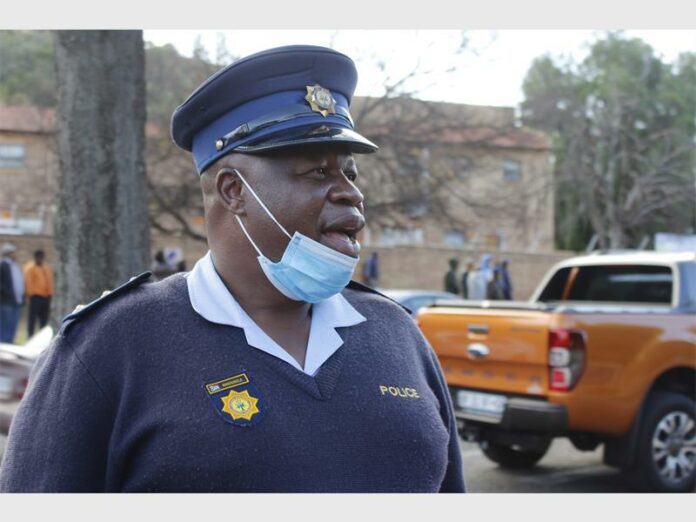 Police spokesperson Captain Kay Makhubele, who has retired from SAPS after 37 years, has fond memories of his career working as an investigating officer, before climbing the ranks and becoming the provincial spokesperson.

Makhubele, 60, told Scrolla.Africa he sent police officers to jail when he was investigating corruption.

Recalling his worst moment, he said that in 1995 that he thought he was going to die when he was shot in the leg by thugs from a syndicate who were defrauding banks.

“The syndicate of owners of big shops made fake documents to embezzle money. Me and my colleagues went to pounce on the suspects at the place where they were working from but they shot me. All my colleagues ran away, leaving me bleeding,” he said.

He said the thugs drove away in their car, but then a miracle happened. They made a U-turn and came back.

“Using the abandoned police minibus, the thugs took me to the Naledi clinic, where I received treatment, before being taken to the hospital,” he said.

He said thugs drove the police minibus to Orlando police station and handed themselves over to the police.

“Maybe, if the thugs hadn’t come back and rushed me to the clinic, I would have died from excessive bleeding. I am alive today because I was saved by the criminals who shot at me,” said the well-known captain.

Speaking about working in the Child Protection Unit before becoming the spokesperson, Makhubele said it was heartbreaking to see young children being raped, chopped up and sometimes dumped alive.

“I have rescued many new born babies, who were stolen in our hospitals at birth and reunited them with their biological mothers,” he said.

“The happiness of the mothers who had lost their children was my greatest reward.”

Makhubele said his best moment was when he was named the best communication officer in Gauteng when Riya Phiyekga was national police commissioner.

“I was so happy. I knew I was doing something that was recognised by my colleagues,” he said.

Makhubele thanked his wife Sophia and children who gave him much-needed support.

“No matter what time my phone rang, my wife would always tell me to answer it. If there was a crime scene to attend, she would encourage me to go while she prayed for my safe return,” he said.