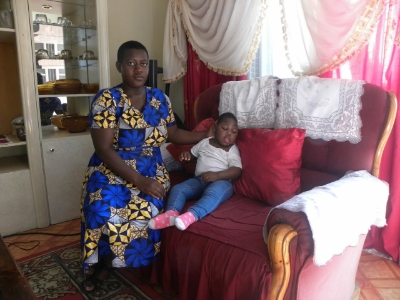 Emma Karimupfumbi had hoped to deliver a healthy and vibrant baby, but that was not to be.

Emma believes that the baby was born with cerebral palsy because the nurses at the Motherwell NU2 did not transfer her to the Dora Nginza hospital on time.

The 23-year-old woman from Gqeberha, Eastern Cape gave birth to the baby in 2018. She now blames the Department of Health for her child’s disability.

Emma said she pleaded with caregivers at the clinic when she got past 38 weeks.

“I was struggling to walk. They transferred me to the hospital too late,” she said.

She said doctors at Dora Nginza hospital induced her and she gave birth on the third day to a baby girl, named Tawa.

“I noticed that my baby was very weak and exhausted and she didn’t cry,” she said.

“They then operated on her head.”

She said she has been struggling for the past two years to feed Tawa because she only eats light food which Emma’s husband can’t afford and they need a wheelchair.

Spokesperson for the Eastern Cape Department of Health, Sizwe Kupelo, said he could not discuss a patient’s medical condition.

“I encourage the patient or the guardian to lodge a formal complaint with the hospital. They can visit Dora Nginza’s CEO’s office to discuss the complaint,” he said.

Eastern Cape SASSA spokesperson, Luzuko Qina said: “SASSA pays a child support grant to a caregiver who is eligible to receive such social assistance. The mother of the child has to have legitimate documents to be in the Republic of South Africa. We will assist her once she has those.”