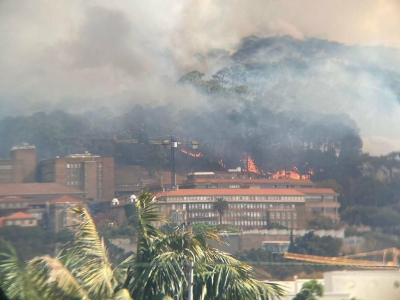 “Did you start the fire?”

“What is your address?”

That was the response from the homeless man when police asked him for his address after they had arrested him on suspicion of starting a fire in the Table Mountain National Park yesterday.

The fires that have raged since Sunday are still not under control. The severity of the damage, specifically to the University of Cape Town library which houses unique and irreplaceable documents, cannot be estimated at this stage.

The man spent the night in custody but authorities could not be certain of his mental state.

The Cape Town Member of the Mayoral Committee responsible for Safety and Security said the man was in his 30s and is understood to be one of many homeless people who sleep in the national park.

It was not clear whether he started the main fire or whether it was caused by one of the other fires lit by the homeless across the park and left unattended.

On Monday, Arlene Wehr, Head of Operations Fire and Rescue Service in the City of Cape Town said some 220 firefighters were still fighting the fire.

“With users now attempting to go running, cycling or walking their dogs we will not be able to concentrate on the fire, especially in the Newlands Forest and the Rhodes Memorial zones.”

“That includes all recreation areas below and above Tafelberg Road, which will remain closed until further notice.”

Tourist attractions like Lions Head and Signal Hill were still open but visitors were urged to approach the areas with caution as the emergency personnel were still in the area.

Over 400 hectares of land and vegetation have so far been damaged.