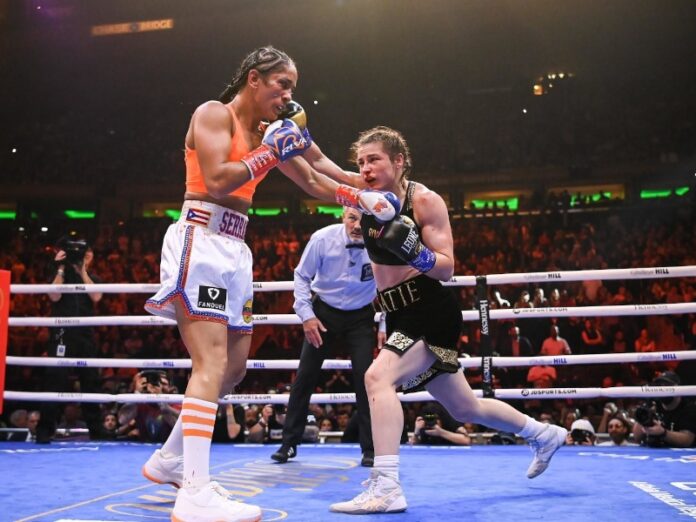 Despite only being in the fifth month of the year, the historic bout between Katie Taylor and Amanda Serrano has been tipped as the fight of the year.

But the fight between the two best female fighters did not disappoint with fans calling it the fight of the year.

The split-decision highlights how close the fight was as the bout could have gone either way without much disagreement.

Both women stuck to their gameplans, Taylor being the more composed of the two. Serrano walked the champion down throughout the fight and landed several left straights from the southpaw stance.

However, late in round four, those gameplans went out the window as both fighters began wildly trading blows in the corner of the ring.

As the fight reached the halfway point, Serrano looked to be edging the bout as her punches looked to be more effective.

However, the Puerto Rican’s power began to fade, and Taylor took full advantage, gaining her second wind in round eight before dominating the penultimate round.

As the fight entered the 10th and final round, the two fighters, the crowd and everyone watching around the world knew this would go down as a classic.

Two judges scored in favour of Taylor, who retained her unbeaten record and all the belts in the lightweight division.

“It was an absolute war for 10 rounds. I’m grateful to be in this position and sell out Madison Square Garden. Look what we’ve just done.

“I said before that when you think Madison Square Garden, you think Muhammad Ali vs Joe Frazier, but now everyone will be thinking of Katie Taylor vs Amanda Serrano,” Taylor told the BBC.

Both fighters declared their intention to stage a rematch in the near future, with promoter Eddie Hearn suggesting they do it all over again later this year.