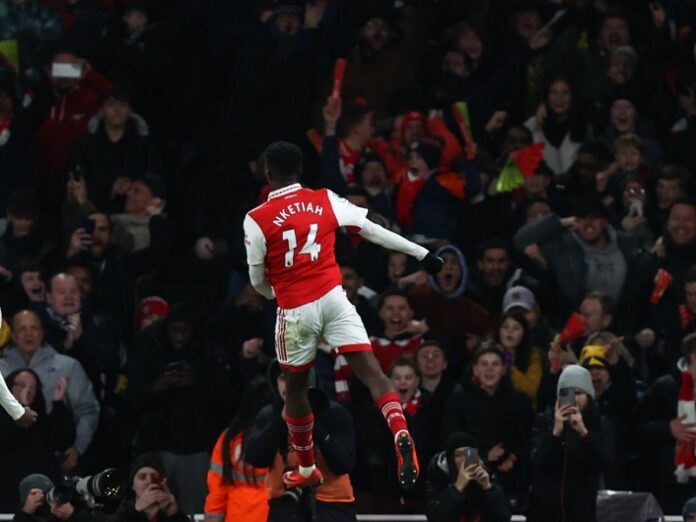 Deputy striker Eddie Nketiah was the hero for Arsenal as Mikel Arteta and Erik ten Hag’s sides delivered a Premier League classic at the Emirates.

It was a game that had absolutely everything as brilliant goals refuelled the age-old rivalry – and a late, late winner cemented Arsenal’s place at the top of the table.

Manchester United took an early lead through the in-form Marcus Rashford, who struck a glorious goal past Aaron Ramsdale in minute 17.

Granit Xhaka found Nketiah at the back post at the midway point of the first half; and it was all to play for in the second period with both sides looking for a fight.

The Gunners had real belief going forward; and it was not just temporary, but rather real hope that the title could just be won this season.

Arteta’s side raged on, creating chance after chance. And Bukayo Saka lifted the fans even more with a pure moment of magic, finding the net from 25 yards out after the break.

United would not give up either, as World Cup winner Lisandro Martinez levelled with his first goal for the club on the hour mark, against the team who tried to sign him in the summer.

You could just sense it was Arsenal’s day, though, and Nketiah left it very late before finding the winner. A VAR check would not stop him; and a stoppage time finish would make it 3-2 to the leaders to cap off a breathtaking affair in North London.

The result means that Arsenal now have eight home wins already this campaign, more than they registered in the entirety of last season.

Their lead at the top extends to five points over Manchester City, who have played one game more than the Gunners.