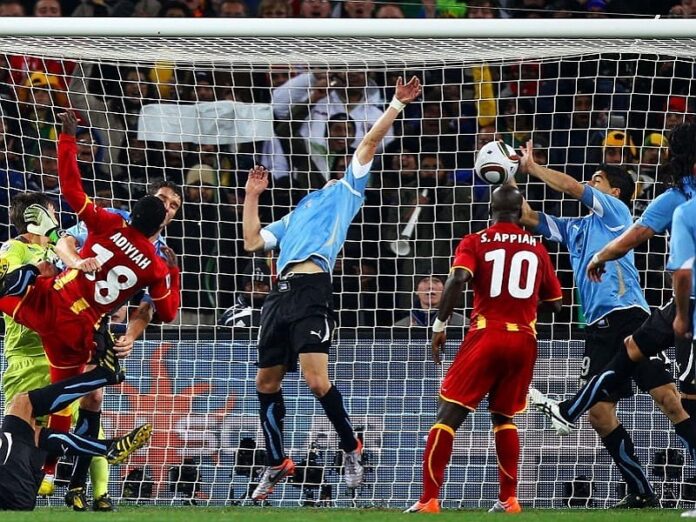 As several teams at the Qatar World Cup look to secure their spot in the knockout stages, one fixture might stand out to South Africans.

On Friday, Ghana play Uruguay, 12 years after the South Americans eliminated the Ghanains at the FNB Stadium in Johannesburg under controversial circumstances.

The loss deprived Ghana of being the first African team to ever reach the semi-finals of the competition — but now they have the chance to exact their revenge.

Ghana’s thrilling 3-2 victory over South Korea on Monday gave them hope that they can advance to the round of 16.

And those hopes took another step towards coming true when Uruguay were defeated by Portugal in Monday night’s final fixture, strengthening Ghana’s place in the group.

This scenario creates a sense of similarity with the 2010 World Cup hosted in South Africa, when Ghana and Uruguay battled it out for a spot in the final four.

With the scores locked at 1-1 in the dying moments of the game, Ghana had the golden chance of taking the lead when a header flew past the Uruguay goalkeeper — only for Luis Suarez to swat the ball away with his hands.

Suarez was handed his marching orders and Ghana were awarded a penalty. Striker Asamoah Gyan stepped up — but he hit the bar, missing the chance to give his side the lead.

Suarez, watching on from the sidelines, celebrated maniacally.

The game went to a penalty shootout where the South American side walked away 4-2 winners, devastating all of Africa.

The incident has been a thorn in the Ghanaian side for over a decade, with players past and present unable to forget the trauma in South Africa.

However, Ghana now have the chance to get their revenge over Uruguay on Friday night.

The outcome is simple. Whoever wins will probably get a spot in the final 16.

Ghanaian head coach Otto Addo said blessings, rather than revenge, is on the minds of the team ahead of the match.

“I’m not a guy who thinks about revenge much,” the manager said after their victory on Monday.

“That incident happened a really, really long time ago and I’m a strong believer that if you don’t seek too much revenge for these kinds of things sometimes you get the blessings.”

Expect fireworks when Ghana and Uruguay meet for the first time since the infamous incident, with so much on the line yet again.

Pictured above: The infamous Suarez incident against Ghana