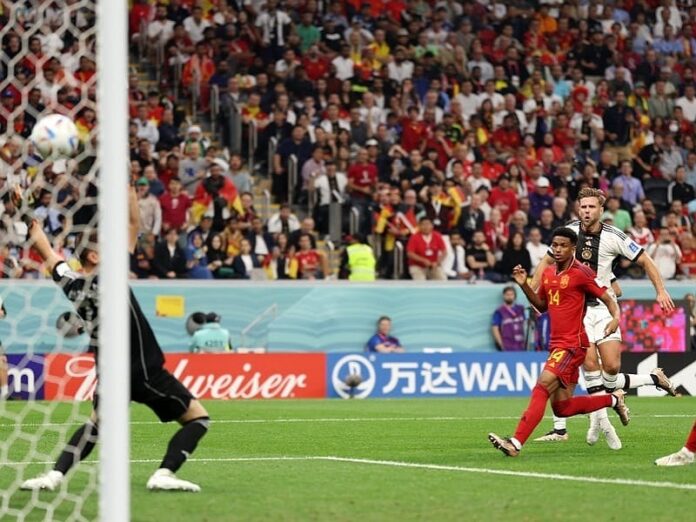 Group E in the Fifa World Cup hangs by a thread and will head to the final round of fixtures after Germany and Spain drew 1-1 at the Al Bayt Stadium on Sunday.

Spain’s thumping of Costa Rica followed Germany’s surprise defeat to Japan in the opening round of games. To add to the drama, Costa Rica managed to beat Japan 1-0 in Sunday’s early game, spectacularly setting up the colossal clash between the European giants.

Hansie Flick’s side needed a result and needed one badly if they were to prevent back-to-back Fifa World Cup group stage exits; but it’s fair to say that the need for victory was not immediately translated to quality football on the pitch.

The first half was controlled by Spain, but the highly anticipated clash had little real goal-mouth action early on.

Antonio Rudiger did find the back of the net on the brink of half time, but the offside flag was raised and the whistle rang to mark the interval with the Germans recording just a solitary attempt on goal.

It began to get worse for the 2014 champions, when Luis Enrique introduced Alvaro Morata just before the hour mark.

The Atletico Madrid man made an almost instant impact, finding the back of the net off a Jordi Alba cross to make it 1-0 to Spain. Morata became Spain’s first ever player to score off the bench in consecutive World Cup appearances.

Germany would have a super sub of their own, though, with Werder Bremen man Niclas Füllkrug levelling late on. The equaliser came in time to just about give the 11th ranked nation in the world a fighting chance in the final round of group stage action.

All four sides will have a chance of last 16 qualification, with Spain the favourites taking on Japan as Germany play Costa Rica on Thursday.