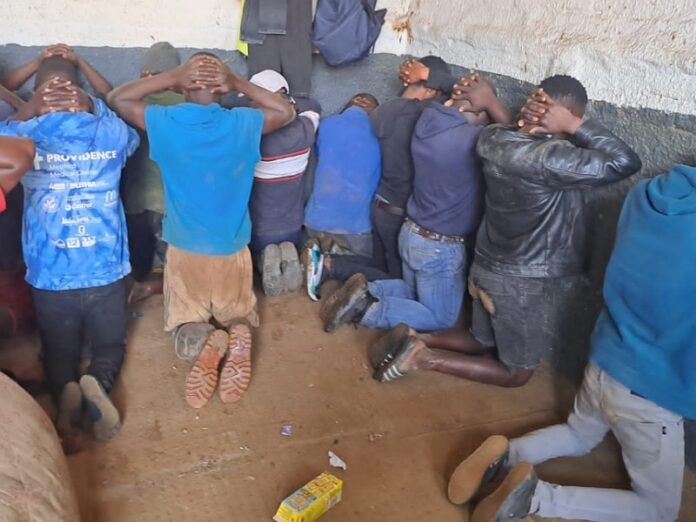 A huge illegal mining processing plant was discovered and drugs worth more than R200 000 confiscated during police raids in Springs, Ekurhuleni on Thursday.

The police made the discovery during Operation O Kae Molao.

He said the raid at the plant in an industrial area was due to an intelligence-driven tip-off that led them to the address.

When police pounced on them, he said, the men, most of them undocumented foreign nationals, were busy processing gold-bearing material with heavy-duty machinery.

Gauteng provincial police commissioner Lieutenant-General Elias Mawela said they launched the first round of the operation on Wednesday, when more than 900 suspects wanted in connection with various crimes were arrested.

“The second phase of the operation, on Thursday morning, started with a roadblock on the N12 highway,” he said. “During the roadblock, a car was stopped and upon searching it, mandrax tablets with an estimated street value of R100 000 were recovered.

“The suspect, who is a foreign national, led the police to Primrose in Ekurhuleni, where more drugs worth more than R150 000 were recovered.

“Still at the roadblock, police recovered a car reported to be stolen and arrested more than 20 undocumented foreign nationals.”

While SAPS members were carrying out Operation O Kae Molao in East Rand, their JMPD counterparts were arresting several undocumented foreigners and illegal miners in different squatter camps around Johannesburg.

David Tembe, Johannesburg’s Member of the Mayoral Committee (MMC) for Public Safety said the JMPD officials partnered with SAPS, Home Affairs and other stakeholders when they embarked on their massive Buya Muthetho operation in Zamimpilo and Langlaagte.

“We have been raiding areas of concern and we will continue putting pressure and squeezing criminals out of our society,” said MMC Tembe.