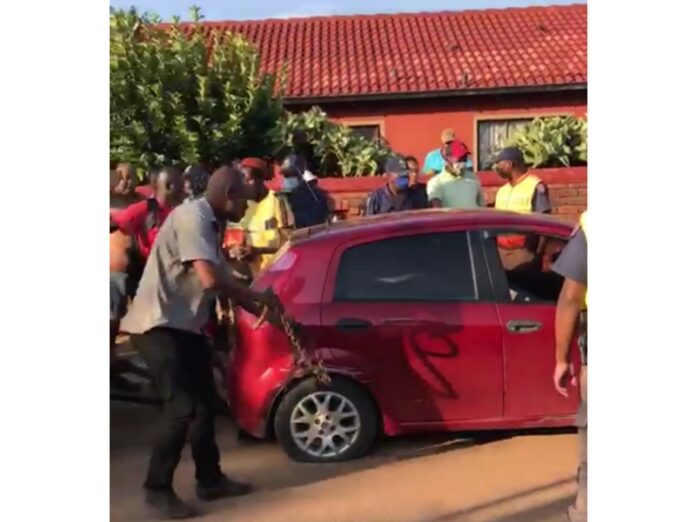 With the City of Tshwane cutting off electricity and water for non paying customers, fraudsters decided that they were going to make a quick buck out of the situation.

On Wednesday two men went to Nellmapius and impersonated Tshwane municipal officials. They went to homes demanding payment to those who owe the city and threatened to switch off the lights and water if they didn’t pay a spot fine of R800.

But then they knocked at the wrong door.

When they went to the home of a former City employee, the retired woman quizzed them and soon realised the two men were fraudsters.

She invited the two men to sit down in the house so she could go to an ATM to withdraw money for them.

But the woman went house to house alerting residents and all hell broke loose.

Resident Matlakala Moufhe said all those who paid came over and the two were moered.

“Some residents called the City because they saw that the two men were going to be killed. Others punctured the wheels of their car while they were being beaten,” she said.

She said everybody got their money back.

“I think they have done it before and should they be released they will do it again,” she said.

A resident said although he suspected that the two were fraudsters because of their foreign accent, they were convincing.

“They wore the City’s reflective clothing and seemed to know about electricity. I told them I had an arrangement with the City to pay but they threatened to switch me off. I rushed to take out a loan from a mashonisa to pay them,” he said.

He said he believed that if big hotels like the Sheraton and government departments could get cut off it meant that he could be cut off as well.

Tshwane Metro police’s Isaac Mahamba said the two were arrested for fraud and impersonating officials and their car impounded.

He said they will appear in court soon.