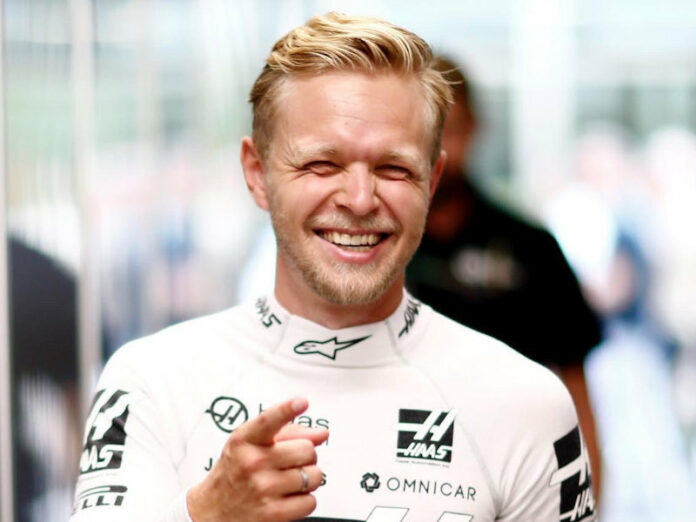 Formula 1 has been labelled as one of the most dangerous sports, but Kevin Magnussen pulled off one of his riskiest moves upon rejoining the sport.

Magnussen took a different path to ensuring his spot back in Formula 1, after already agreeing a deal with the Haas team, he then phoned his wife to ask her permission in an attempt to get her approval.

When the Danish driver was asked if he went about his return in the wrong order, he laughed and said “probably”.

As the 2022 season drew closer for Formula 1, Haas found themselves needing a new driver after their Russian rookie Nikita Mazepin was barred from racing.

Mazepin’s father Dmitry was the major sponsor through his energy company Urakali, which has ties to the Kremlin.

The Russian involvement in the Haas team came to an end as Ukraine was invaded by President Vladimir Putin weeks before the first race in Bahrain.

Team principal for Haas Guenther Steiner immediately picked up the phone and requested that Magnussen rejoin the team that he left only two years before.

“He quickly got to the point and asked me, ‘Do you want to go back to Formula 1, and are you ready for it?'” Magnussen told Sport Bild.

“I didn’t think for a second. I immediately agreed. After that, I called my wife and asked her for her permission.”

The 29-year-old said he had written off a return to Formula 1 after he was booted from Haas in 2020, but he could not miss this opportunity and he knew his wife would agree.

“She knew that this was a unique opportunity. I actually already had written Formula 1 off,” he added.

Magnussen has enjoyed a remarkable return to Formula 1, finishing inside the top ten in three of the four races this season.

Haas scored zero points throughout the entirety of last season, this season they already have 15 points, all coming from their Danish driver.

Next up for Haas and Formula 1 is a trip to the United States for the Miami Grand Prix on Sunday 8 May.