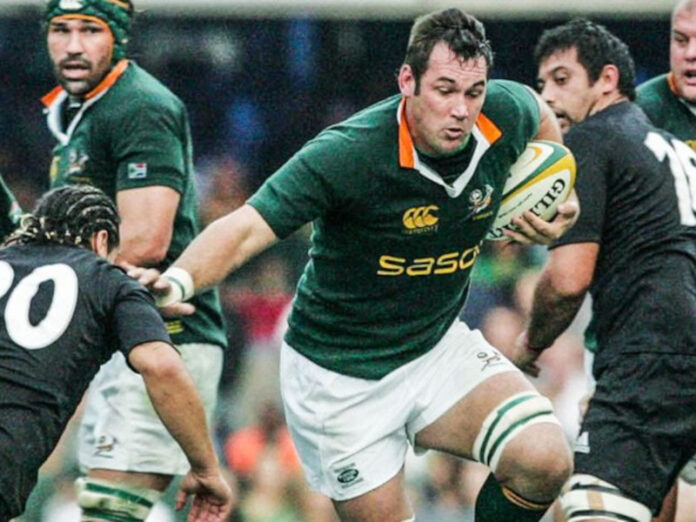 Former Springbok flanker Pedrie Wanneburg lost his life at the age of 41 following a car accident in the United States on Saturday.

Reports suggest the accident occured when a driver believed to be involved in a high-speed police chase crashed into the back of Wanneburg’s stopped vehicle.

Wanneburg’s son was rushed to hospital for immediate surgery while his wife and daughter did not sustain major injuries.

Unfortunately for the former Springbok, he was declared dead on the scene.

Wannenburg made 20 appearances for the South African rugby team between 2002 and 2007. The flanker played for Irish side Ulster between 2010 and 2012.

He made his debut for the Springboks in 2002 against France in Paris.

Wannenburg won three Super Rugby titles with the Blue Bulls while becoming the first player to appear 100 times for the Pretoria based side.

He left Belfast after reaching the Heineken Cup final in 2012, moving to France to play for Castres.

Wannenburg left France to apply his trade in the United States in 2016.

SA Rugby president Mark Alexander paid tribute to the former Springbok, describing him as always having a smile on his face.

“Pedrie will be remembered as one of the first real versatile loose forwards who could play in any position in the back-row and even though he played in only 20 Tests,

“His record in the colours of the Bulls, during a period where they dominated on all levels, is nearly unmatched,” said Alexander in a statement.

Alexander added that his best moment came against New Zealand in 2006 when he scored the match winning try.

“Pedrie was a fun-loving and hard-working man and someone who gave all he had on the pitch, but afterwards always had a smile on his face.

“He represented his country with aplomb – who will ever forget the try he scored in the narrow victory over the All Blacks in Rustenburg in 2006?” he added.

Wannenburg is survived by his wife and two children who live in Texas, United States.