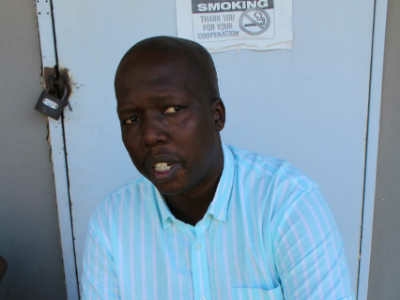 Lehlogonolo is the founder of Aga Sechaba NGO in Ga-Rankuwa, a centre aimed at reintegrating recovering addicts and former convicts into society.

Lehlogonolo says that he was a troubled child who terrorised the community, teachers and learners.

“I was always a rebellious child. I started experimenting with cigarettes. I went on to dagga and before I knew it I was addicted to heavy drugs,” he said.

He was arrested for the first time when he was 13 for assaulting a neighbour.

“I enjoyed prison life because I felt like I belonged there. Older prisoners taught me how to smuggle drugs in and out of prison,” he said.

With his newfound “skills” he became a fully-fledged drug trafficker.

His drug supplier introduced him to the main drug lord in Gauteng. His role was to supply drugs to all the A-list night clubs in Johannesburg and Pretoria and to recruit drug mules for overseas trips and across the country.

“I travelled to London nine times without being caught and the big bosses decided to appoint me as a receiver in London,” he said.

“But in 2006 I was caught with 20 kilograms of drugs. I was sentenced to five years in prison.”

In 2007, due to the economic recession in the UK, he and other foreign prisoners were released early after his sentence was reduced by eight months.

“While I was in prison I decided to turn my life around,” he said.

“I started motivating young addicts and ex-convicts who had given up on life.

Lehlogonolo went on to register an NGO and today he devotes his time to helping addicts and ex-convicts.