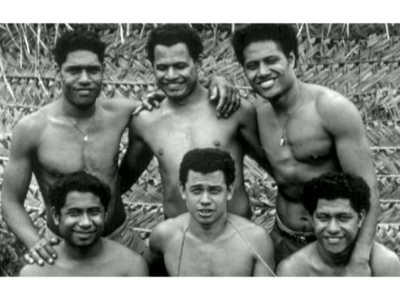 For over 50 years, one of the world’s most remarkable true stories, of survival and human cooperation, was left untold beyond the coast of the Pacific island of Tonga.

But last year, Rutger Bretman, a famous Dutch historian, found by chance a newspaper clipping about six Tongan school boys – the oldest 16 – who for 15 months were shipwrecked on a small deserted island.

In 1965, the boys were desperate to escape their boarding school. So one night, they ‘borrowed’ a small sailing boat from Taniela Uhila, a local fisherman who the boys disliked.

They sailed out to sea, aiming for the island of Fiji situated some 500 miles away. Asked in an interview with CBS whether they had either a compass or a map with which to plot their route, one of the boys, Mano Totau, laughed. “No.”

After only a few hours at sea, there was a storm. The violent waves wrecked both their sail and their rudder. Without the power to steer, they could only drift.

After eight days, the boys were weak with hunger and dehydration. They were under little illusion that their doom awaited them.

Then a spot appeared on the horizon. The spot slowly but surely grew and the boys soon found themselves clambering onto the shores of Ata, a tiny island 100 miles from Tonga.

At first, Mano and his five friends survived on drinking the blood of birds and sucking the eggs from their nests.

Once they had regained their strength, they climbed to the summit of the volcanic island. There, they set up camp. The resourceful group built a hut, a chicken pen, a makeshift gym and a fire that never went out in over a year.

The boys were desperate to go home, but they didn’t let their forlornness come between them. When they argued, they imposed a time out, and they each took on roles – cook, lookout, forager – that were imperative for their survival.

After 15 months, a lobster fisherman called Peter Warner sailed close to the island. Through binoculars, he spotted the alarming sight of six boys swimming frantically towards him.

Peter called up the Tongan operator, who told him that these boys were presumed dead back home, and they had all been given funerals.

Upon arriving home, the boys were immediately arrested. Uliha was still upset about his stolen boat.

But Peter paid for their release, and not long after returning home he organised for a film crew to travel with the boys back to Ata to reenact their tale of survival, footage of which survives today.

When Bretman travelled to Australia to search for the six Tongan boys, whose story had long been forgotten in the media, he discovered Peter and Mano living close by to one another. The two, it turns out, have remained lifelong friends.