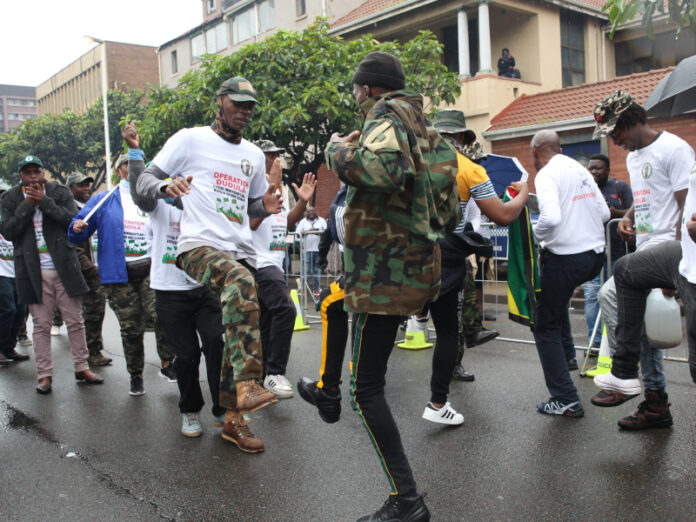 Operation Dudula, a movement which began in Johannesburg, launched its KwaZulu-Natal branch in Durban on Sunday.

Throngs of supporters of the anti-immigrant movement gathered under heavy police presence at Durban City Hall, where members delivered a memorandum to the Point Police Station.

At the heart of their grievances were allegations that the majority of buildings in the city centre had been hijacked by foreign nationals. They also complained that the informal economy is being dominated by undocumented migrants.

“We are fed up. Point road is the notorious street in Durban [where] illegal immigrants are selling drugs in every corner. We are also concerned about illegal prostitutes in the city. We want to make sure that we put more pressure on SAPS in order to execute their tasks,” said Dumakude.

During the demonstration, nearby streets were unusually quiet as almost every foreign-owned shop closed its doors for the day.

Members of Operation Dudula have previously been accused of forcibly closing foreign-owned businesses as well as raiding and vandalising properties owned by foreigners.

Heavily-armed SAPS together with Metro Police were present to monitor the march, which was largely peaceful.

Dumakude praised the recent hype around Operation Dudula saying that it is a rapidly growing movement despite difficulties they have encountered in Johannesburg.

“Concerned citizens across the country endorse this initiative. The numbers of people who support Operation Dudula are skyrocketing,” he said.

Dumakude denied any suggestion that Operation Dudula promotes violence towards foreign nationals, distancing the movement from members who have been accused of assaulting foreigners.

“On the allegations that we demand proper documentation from the allegedly illegal immigrants and physically abuse them, I can safely say we distance ourselves from thuggery.

“The Department of Home Affairs are the ones who deport illegal immigrants, our role is to put pressure,” Dumakude said.

Last week, supporters of Operation Dudula who had gathered in eThekwini were sent home, unaware that the launch had been postponed.

Scrolla.Africa has learned that this is because local leader Philani Gumede was arrested for incitement of violence.

Gumede was charged with incitement to commit public violence and contravention of section 14 of the Cyber Crimes Act. Durban Magistrate’s Court granted him R5,000 bail on Wednesday.

President Cyril Ramaphosa has condemned the actions of Operation Dudula, describing it as a “vigilante type” organisation whose actions are illegal and are likely to end in bloodshed.