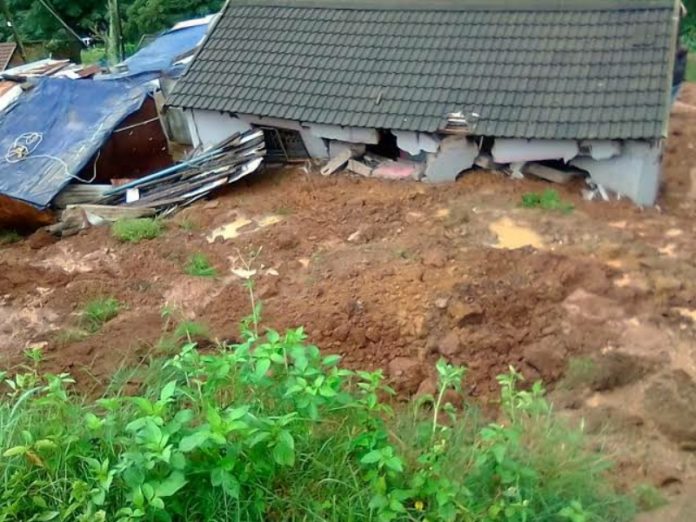 When the floods came and houses and shacks were washed away, displaced residents were accommodated in a community hall.

The eThekwini municipality said the hall would be their temporary shelter until they are moved to safer and better houses.

But that was a year ago, and, to this day, the 20 families from Umlazi are stuck in the same dirty hall without running water, electricity, or functioning toilets.

Visiting the hall, Scrolla.Africa was greeted by the stomach-turning smell from the toilets.

To stay warm during the freezing winter nights, residents place pillows and plastics over the broken windows.

They use candles for light and primus stoves for cooking.

Jabulani Cele, a resident in the hall, lost everything when his two-room mudhouse collapsed during the rains.

“I lost everything. I’ve had to start from scratch,” he said.

“Staying here is a living hell.”

While children are playing outside the hall, unaware of their parents’ frustrations, Cele and other families prepare supper in pots despite the smell of faeces filling the hall.

Thandazile Langa, who lives with her boyfriend and one child, aged five, said they are used to this now.

“I fear for my daughter’s health,” she said.

The residents have partitioned the hall with sheets.

Some residents, such as Sibongile Ngcobo, have returned to their partially collapsed houses.

“I couldn’t survive in that hall anymore so I came back here to my house,” she said.

Two rooms of her three-room house have been destroyed.

Belinda Mthabela, however, still stays in the hall. Her house was completely washed away.

“We can’t take this anymore. If our government really cares for poor people like us, why are they leaving us to live in such a place.” she asked.

Scrolla.Africa asked ward councillor Amon Dladla for comment. He told our reporter to call back after an hour, but then did not answer his phone.

eThekwini municipality spokesperson Mandla Nsele said according to their records, the families who were affected by the storm were relocated to another transit camp.

“If it happens that there are new families that we were not aware of, an investigation will be conducted so that they can be assisted immediately.”