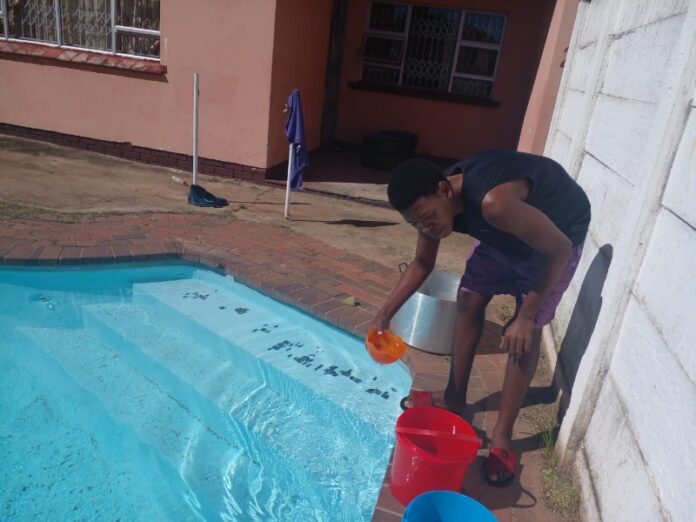 With the shortage of water in many areas of KwaZulu-Natal caused by the recent floods, residents from suburbs have come up with their own plans to survive.

They have resorted to using water from their swimming pools for all household needs.

The Dube family in the Whitfield suburb near Amanzimtoti, south of Durban, is among those who have resorted to using their pool water.

It’s been seven days since the water was cut off after last week’s heavy rain and floods.

“It’s been a hectic week since the floods started. Water was cut off. Now I have to drive 2 kilometres to my friend’s house to get drinking water,” said Siya Dube.

He told Scrolla.Africa that his family uses swimming pool water for washing, flushing the toilet, cleaning and other household purposes.

Another resident, Ayo Dludla, said those in the suburban areas in the eThekwini municipality do not receive attention like those in the townships.

“We are also devastated. It’s been a week now without running water. Every morning I have to fill up buckets with swimming pool water to clean the house and perform other household needs,” she said.

“I urge our government to divert focus. There are no water tankers around my place. It’s like we are abandoned.”

Umgeni Water spokesperson Shami Harichunder said two aqueducts which supplied raw water to the Durban Heights Water Treatment Works were broken during the floods in the vicinity of Molweni, Inanda.

The water treated at the plant is supplied to eThekwini Water and Sanitation, which then sells it to consumers in north, south, central and inner west regions in Durban.