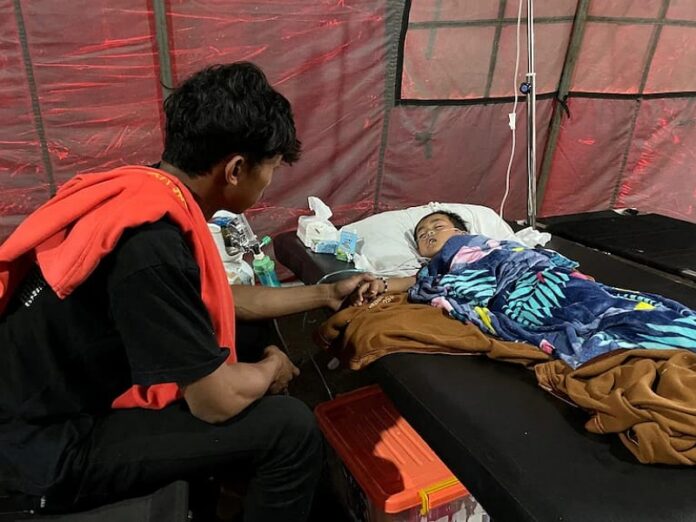 A five-year old boy named Azka was trapped for two days under rubble after an earthquake struck Indonesia on Monday, killing hundreds of people and leaving many displaced and with no homes or families.

His mother was killed in the disaster, but he survived because he was protected by a mattress.

Before Azka was found, rescue workers had to delay their search for survivors because of driving rains and the danger of landslides. The chances of anyone still being alive was becoming slim, and an official warned that time was running out for anyone trapped.

In a video of the rescue that was posted by a local fire department, Azka appeared conscious and calm as he was being lifted to safety.

One of his relatives said Azka was fine, not wounded. The doctors said he was just weak because he was hungry and had been trapped for two days without having water to drink.

The 5.6-magnitude earthquake caused extensive damage in the town of Cianjur, in mountains about 75km south of the capital, Jakarta, and 40 people are still missing.

The death toll is reported to be at least 271 people, many of those being children.

Helicopters were due to drop food and water to two villages that could not be reached by road, according to the chief of the search and rescue agency, Henri Alfiandi.

He said the chances of anyone trapped in rubble surviving three days after the earthquake were increasingly slim and the danger of aftershocks triggering more landslides on rain-soaked slopes had delayed his teams.

Authorities were working to bring in more heavy machinery to clear the landslides. About 6,000 rescuers had been dispatched, the disaster mitigation agency said. Officials said there had been more than 170 aftershocks, including a 3.9-magnitude one on Wednesday afternoon.

At a Cianjur hospital, patients were being treated outside in tents due to the fear of aftershocks, a member of staff said. The health minister, Budi Gunadi Sadikin, said there was an urgent need for extra help for patients in quake-damaged hospitals.

Monday’s quake was so deadly because it struck a densely populated area at a shallow depth of just 10km. Poor building standards led to many deaths, officials said.

Rescuers remain hopeful that more survivors will be pulled from the rubble, but they are “running against the clock”, according to Deni Kurniawan, a rescue team leader for the Jakarta-based NGO Human Initiative.