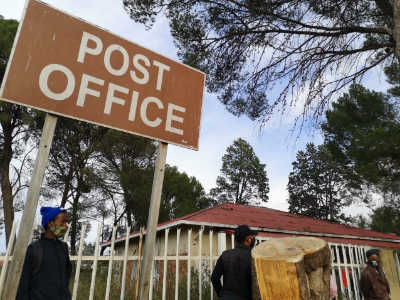 When two men entered the Bainsvlei Post Office in Bloemfontein no one suspected they had ulterior motives.

After all, they had a box that they were going to ‘post’.

What the staff at this post office didn’t know was that the men were pretending to be clients carrying a ‘parcel’ that was later found to be a lot of bricks.

Minutes later, four female staff were overpowered by the men and over R100,000 in cash was stolen.

The news of the robbery that took place on Tuesday soon spread around the township and got local residents worried if they will receive any of their Sassa grants.

Mathabo Mapesa, 37, said it would be a blow for her and her three kids if that had affected Sassa grants negatively.

She told Scrolla.Africa: “The nearest post office is far from here and requires one to board a taxi. I can’t afford the taxi money for me and my kids that also pay. I just wish robbers could stay away from the post offices because we all know they pay a lot of Sassa grants to millions of people. This is stealing from the poor.”

Resident Piet van Rooi, 72, told Scrolla.Africa: “All I care about is my pension money. I have been told that on grant pay day, I will receive my money in full.”

Sassa spokeswoman Motshewa Maleka said: “No, robberies do not affect the grants, our people should not worry.”

Police spokesperson Brigadier Motantsi Makhele confirmed the robbery and said the manhunt for the two suspects had been launched.

A source who wished to remain anonymous said an amount totalling R118,000 was taken by the suspects.

“The staff was terrified but we are grateful that they are still alive. The money was getting ready to be taken for banking when the incident happened. There was shock to see bricks inside the ‘parcel’ box that came with the suspects. I hope they get arrested before they attempt another robbery and kill someone.”

Anyone who might have information concerning the incident is requested to call Warrant Officer Lebohang Abram Marema at 082 466 7255, or the nearest police.