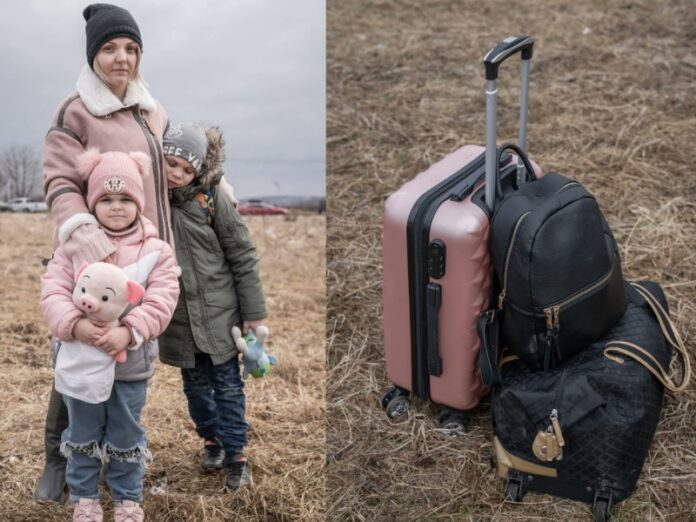 Wayne Stockton, a former South African soldier, had long ago given up fighting and was living in England when a former army buddy phoned him with a desperate plea.

“Can you rescue my wife and kids from Mariupol?”

Stockton’s friend had met a Ukrainian woman and relocated from Parys in the Free State to Ukraine, where he was farming.

When the Russians invaded, all able-bodied men in Ukraine were called up to fight. The former SADF man put on a Ukrainian uniform and went back to war.

So he called Stockton, his old army buddy, and begged him to rescue his wife and two children trapped in Mariupol.

Stockton had never been to Ukraine but he knew that Mariupol was the burning port city that was then coming under siege and massive bombardment from Russian forces.

He was told that Russian soldiers, unpaid and unfed, were roaming the countryside looting, raping and murdering. It was not safe for his friend’s wife and children to make their way on their own out of the city.

Stockton immediately agreed to help, to venture out on one last military operation. He caught a plane to Krakow in Poland, from where he boarded a train into Kyiv, the capital of Ukraine.

Stockton’s buddy had organised for a woman translator to meet him in Kyiv – with his battered old Fiat. She also had a small amateur radio, allowing them to listen in to the Russian military.

From Kyiv they headed south to Mariupol, armed with a map book that had been printed in 1975 – all he could find.

The map book was helpful because Ukrainian defenders had removed all the road signs to confuse the Russian invaders.

On the outskirts of Mariupol, he encountered a bridge into the city. Russian and Ukrainian MiG jets were flying around – and he was very concerned that at any moment the bridge could be a target.

He could hear the fighting nearby. Russian artillery was shelling the city.

Stockton and the interpreter watched as four companies of Russian troops – around 800 men, he estimated – crossed the bridge and entered Mariupol.

There was a crescendo of gunfire and explosions – but after a while all went quiet.

He saw five civilian motorcars drive past and over the bridge. Encouraged by seeing them make it across, a solitary Russian armoured vehicle started to cross the bridge.

A single flash of light, a loud noise and the armoured car was gone, a burnt out hulk of metal with its turret lying next to it.

The crew were killed instantly.

It wasn’t the first piece of Russian armour Stockton and his passenger had seen destroyed. Earlier he had witnessed Ukrainians pour 20 litres of petrol into the open hatch of a Russian T90 tank, then set the tank alight.

Knowing that he had to cross the bridge to rescue his friend’s family, Stockton looked in horror at the burning armoured car.

His interpreter assured him that the old Fiat he was driving was too cheap a vehicle for anyone to waste an anti-tank missile on. That hardly reassured him, but he knew he had to keep going.

“The place is a lunatic asylum” he thought as he drove over the bridge. A traffic cop wearing a high visibility vest appeared from nowhere and put traffic cones around the wreck of the armoured car. The cop then set about directing traffic to make sure nobody broke any traffic laws.

Driving into the destroyed city of Mariupol, which had a population of 430,000 before the war, Stockton saw the remains of the 800 Russian soldiers he had seen enter the city.

Most of them were lying dead in the street, while neatly dressed Ukrainian housewives stepped over their corpses to look for whatever shops may still have some food left to sell.

With their fire service totally overwhelmed Mariupol was a blazing hell. The heat, the smells and the noise were intense. Even in the dark the burning buildings made it possible to drive without headlights.

He got into the city as fast as he could, and found the family.  He gave his friend’s kids some toys he had brought with him.

The family were loaded into the tiny Fiat, taking only a suitcase of possessions each, and they made a run for it to get out of the city.

A former signaller, Stockton was able to use the radio to listen to Russian soldiers speaking to each other on commercial CB radios, and this helped him know where they were so he could evade them.

Many hours later they reached the Polish border where Ukrainian officials processed the woman and children as refugees fleeing the war zone.

Stockton’s friend remained behind in Mariupol fighting with his unit, thankful that his wife and children were safely out of the country.

In Mariupol, the slaughter continues. Despite intense Russian attempts to control the entire city, about 2,000 fighters are holding out in the last bastion – the Azovstal steel plant. There are thousands of civilians – mostly women and children – still trapped with them.

The fighting has continued for weeks, at a huge cost in human life and a wrecked city.

Stockton is certain of one thing: the Russians may capture Mariupol, but they won’t stay long.

“Taking a city is the easy part. Holding it when everyone wants to kill your troops is harder.”