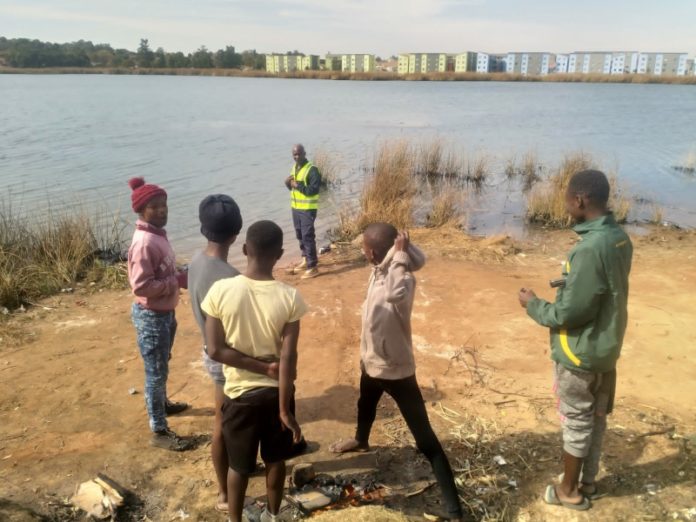 Visitors to the Fleurhof dam go there for many different reasons. For some, it’s a spiritual journey, while others say it has healing properties.

Some people come equipped with Bibles, while others are accompanied by their sangomas.

Others have been known to perform rituals there, such as slaughtering animals – but some please their gods by throwing coins into the water.

A group of young children, all aged under 12, then show up afterwards to sweep up the money.

Scrolla.Africa visited the dam, located between Soweto and Florida, over the weekend and came across six children all scanning the waters for money.

An 11-year-old boy said they all come to the dam because schools are closed and they are bored sitting at home. “We discovered that people leave money here.

“We don’t know and we don’t believe in their rituals. That’s why we take the money and put it to good use.”

The boy said he did not believe that the money would bring bad luck to him. He makes his own luck.

“If I am lucky, I pick up over R50 a day. I take it directly to the spaza shop where I buy what I want.

“If there is bad luck, the spaza owners would definitely have that bad luck and not me,” he boldly said.

The boy could be seen with his other five friends hanging around the edge of the dam, where most of the prophets take their clients.

Even the cold weather does not dampen the boys’ spirit, lighting bonfires to warm themselves while they impatiently wait for the superstitious to leave their money behind.

“Usually, people throw in the dam coins like R5 and R2s.”

While the dam has become a haven for them, the area is a well-known hotspot for crime, with many people reported to have been robbed of their belongings there.

Public Safety officer Joel Mabaso warned the young boys to refrain from coming to the river, as many people have been victims of crime there.

“We had many reports of crime being committed from the dam. It is advisable for people not to go there or go in large groups.”