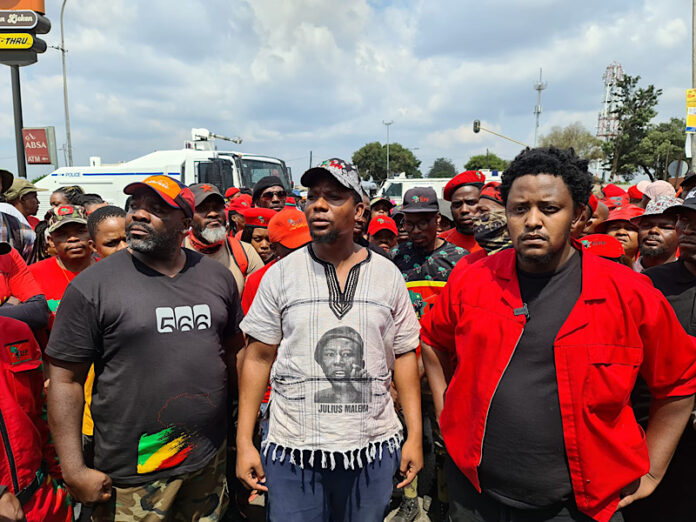 In a highly irregular move, the Economic Freedom Fighters (EFF) have told the police that if they fail to arrest the leader of anti-immigrant group Operation Dudula, they will arrest him themselves.

On Wednesday, the party said law enforcement had seven days to arrest leader Nhlanhla Lux Dlamini for breaking and entering into the home of Ntate Victor Ramerafe before intimidating and assaulting him.

It also accused police of “being Operation Dudula’s bodyguards whenever they carry out their illegal raids.”

Supporters of the EFF and Operation Dudula came face to face on Wednesday at Dobsonville police station.

Addressing the supporters outside the station on Wednesday, EFF national spokesperson Sinawo Thambo called Nhlanhla Lux a “toy soldier”, “con artist”, and a “thug who victimises the vulnerable people in society”.

“We are giving the police seven days to arrest Nhlanhla Lux.

“We don’t want to see him in Alexandra, in Dobsonville, or anywhere else,” he said.

He also hinted that the party would be willing to harm the movement’s leader, warning that if the police don’t arrest him, they will deliver him to the police in a condition that the police won’t like.

“If the police don’t arrest him, we are going to take the law into our hands. When he enters our yards, he won’t come out alive,” says Thambo.

Thambo also accused Operation Dudula of being funded by the whites to cause havoc in the black community.

Responding to the EFF’s threats, Lux told Scrolla.Africa that members of Operation Dudula should not get angry and return the insults that the EFF have thrown at them.

He said that Operation Dudula marched peacefully to the Dobsonville police station on Wednesday, while the EFF came brandishing weapons.

“EFF is going through a lot. We came to the police station in a peaceful manner carrying the South African and organisation flags. We were not intimidated by them carrying all the weapons like golf sticks, spears, hammers, and wooden sticks,” he said.

Local resident Maria Mphepo said that the move has worsened her opinion of the party.

“I had hopes in the EFF fighting for black people. But now, I am defeated. I don’t know whether to support them or not.”

Later on Wednesday afternoon, the Alexandra Dudula Movement arrived in Soweto in taxis full of supporters. Leader of the movement Simon “Msayza” Rati said they came to Soweto to support their counterparts.