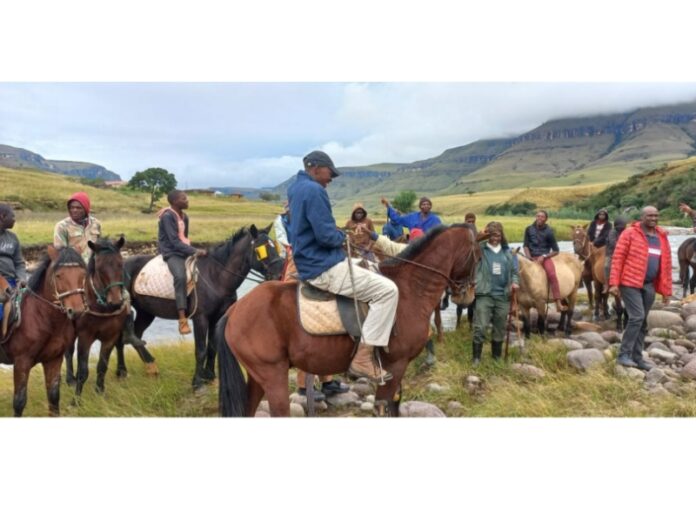 Heavy rains in KwaZulu-Natal have forced organisers to cancel the most important horse riding event on the Easter calendar of the rural Bergville community.

Participants and spectators were forced to go home after the riders were unable to cross the Bhalekisi river to the venue on Sunday.

Horse riding is a big part of the Easter entertainment calendar and many people in Bergville look forward to it as they have few activities happening in the area.

Mphumzeni Dlodlo, who is a prominent member of the community horse riding group, said that they were very disappointed that they were unable to take part due to the floods.

“This is our own entertainment activity that we do every Easter Sunday. It helps us to come together as community members and enjoy ourselves. This race also gives our kids a chance to learn how to ride horses,” said Dlodlo.

For years those who participated in the event and won were awarded goats, but this time Dlodlo said they had a R5,000 stake that was donated by their ward councillor, Zamdela Khumalo.

Councillor Khumalo said it was very disappointing to see participants turning back.

“The situation was bad and the river was dangerously full. We don’t know when the next event will take place after this one has had to be cancelled,” said Khumalo.

Bergville is among the KZN areas that were affected by heavy rains.

The open space of the land around Bergville, which is crossed by many water sources including the Tugela River, saved the town from heavy floods.

Their neighbours in Ladysmith were not as lucky; the town was buried under water.

Floods that took place ahead of the Easter weekend have destroyed many towns and infrastructure.

The N2 from Port Shepstone to Durban has reportedly collapsed and road users are advised to find alternative routes.