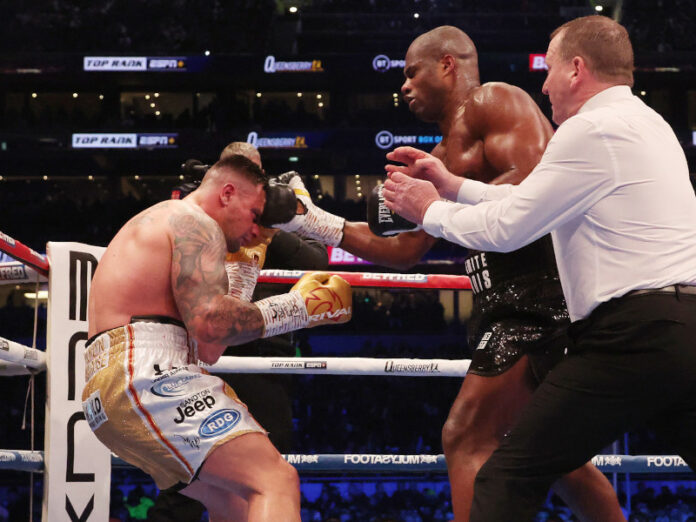 It seemed the dream start for “Two Guns” Lerena as he dropped the young British boxer on three occasions in the opening round.

A left hook to the head by Lerena set Dubois off balance and resulted in an ankle roll for the 25-year-old.

Dubois’ was clearly struggling with his right leg, falling to the canvas another two times before he was saved by the bell.

It was crisis mode for Dubois and his corner team, who urged him to stick to his jab and focus on recovering the injured ankle.

Lerena in the end will perhaps look back on the fight and question why he didn’t put more pressure on the ailing Dubois.

And that is because in round three of the fight Dubois seemed to have somewhat found his feet once again.

Landing big shots on the 30-year-old South African before sending Lerena crashing down with two minutes still to go in the round.

Dubois smelt blood and for the 18th time in his career, he won by way of knockout after Lerena fell to the floor for a second time as the round ended – the referee had seen enough and called the fight.

The fight in London meant so much for both boxers as a win would put them right in the middle of the heavyweight mix.

It was jubilation for Dubois and despair for Lerena, who suffered only the second defeat of his career, the first in eight years.

An all-British bout between Dubois and seasoned veteran Dillian Whyte was tipped as his next fight, but first the youngster needs time to recover from the nasty-looking injury.