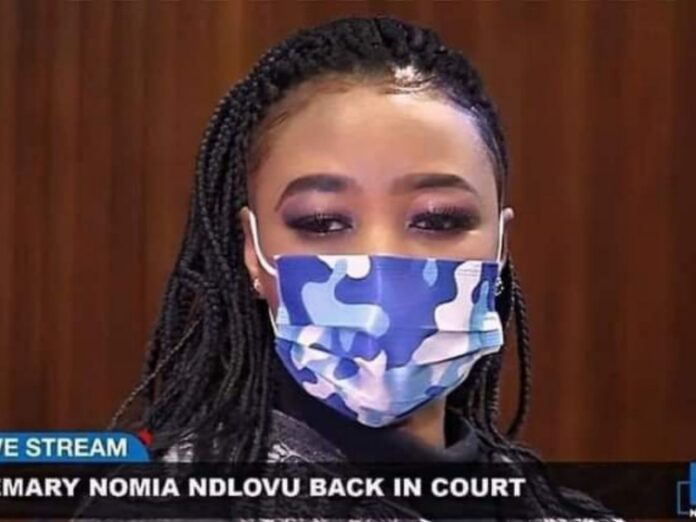 When Rosemary Ndlovu appeared in court on Wednesday on fresh conspiracy to commit murder charges, she had the eyes of the country on her – and she certainly dressed like she knew it.

She wore an elegant black top wrapped over her shoulders. Her hair was freshly done and she wore fancy makeup. On her wrist was a silver watch and on her ears black and white dotted earrings.

Behind a blue camouflage face mask, her dark eyes betrayed nothing.

A former police officer, Ndlovu has become widely known for the heinous crimes she has been convicted for.

But the lady dubbed Killsurance has been noted for another feature: she is always dressed to the nines when she appears in public.

Now some people are asking: where does she get her hair and nails done while in jail? Who is sponsoring her while she is in prison?

Ndlovu has been behind bars for six months for the murders of five close relatives including her lover and a sister. She was convicted for the murders after she fraudulently claimed insurance polices.

I have been following her since the beginning, after she was arrested in March 2018 for murdering six of her family members, and witnessed the first time she appeared in the Tembisa Magistrate’s Court.

Before her arrest in March 2018, Ndlovu was mostly seen in her well-ironed sky blue police uniform.

But she got fired from the force after her arrest and the blue uniform was taken away by the state.

Ndlovu has always been a woman who refused to allow her appearance to reflect her troubles.

From the day of her very first court appearance in Tembisa, she has dressed immaculately – taking every opportunity to stand out in the courtroom – and there has never been a hair out of place.

Given a chance to speak in court, her confidence spoke volumes as she looked unshaken.

One would expect that Ndlovu only dressed for the big TV cameras. But has been slaying since long before the TV cameras and most of the media found her story at the end of last year.

She has always dressed stylishly.  In winter, she wore a warm woolly jersey, a flowery dress, and shiny black high-heels.

Besides being followed and surrounded by heavily armed policemen she has always been at ease, and somehow always manages to look fresh.

When the case was transferred to the High Court, I continued following her, and still with no big TV cameras, Ndlovu presented herself well before the court.

Her hair was well done, and her nails and lips matched the dresses she wore.

Only once did I see her composure change.

Towards the end of her long trial in the Johannesburg Magistrate’s Court sitting at Palmridge, I approached her to ask how prison was treating her. As I walked towards her, she recognised me and showed me her backside by pulling her flowery dress up.

Then she said to me; “you have been following me since the day the case was sitting at Tembisa Magistrates,” and then she smiled. I smiled back.

We haven’t spoken since.