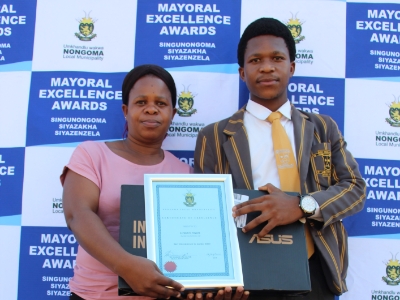 He is now taking it to the next level.

The young man from White City in northern rural KwaZulu-Natal is on his way to studying to become a doctor.

The 19 year old has been awarded a Certificate of Excellence and a laptop to help him with his tertiary studies by the Nongoma Local Municipality at the annual Mayoral Excellence Awards.

Lindani told Scrolla.Africa achieving great results in life you have to give it your all.

“You have to be self-motivated and be in control. You can’t depend on anybody else because when the obstacles come, they hit you and you are alone,” said Lindani who is already doing his first year of medicine studies at the University of KZN in Durban through the National Student Financial Aid Scheme (NSFAS).

“Even at crèche he was already serious about his school work,” she said.

“I also want to thank Dinuzulu High School. His teachers also worked very hard and they worked with us as parents,” she said.

“I can’t wait to see him achieving his lifelong dream of being a doctor.”

“I love being at tertiary,” said Lindani.

“But I can’t wait to get back home and serve my community.”