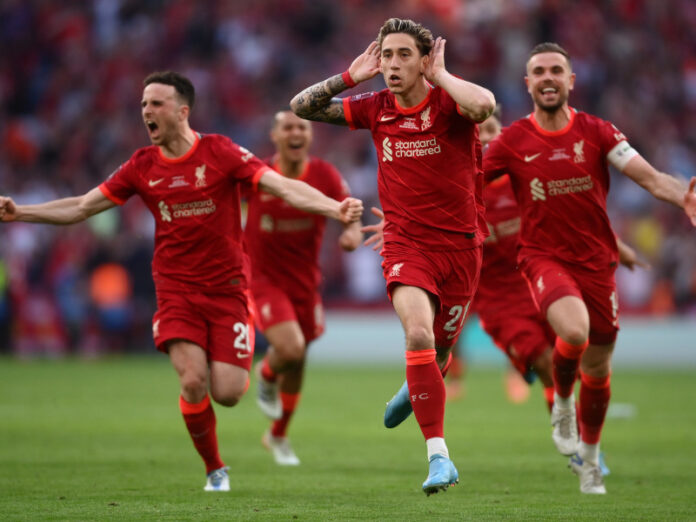 Liverpool defeated Chelsea on penalties for a second time this season in a cup final as Kostas Tsimikas scored the winning penalty.

It was deja vu at Wembley as the home of football turned red yet again after a nervy 120 minutes of play led to a penalty shootout.

With no goals in normal or extra time during the Carabao Cup final in February, football’s oldest cup competition witnessed the same fate with nothing to separate the two sides yet again.

The possession was evenly balanced with both teams having periods on the front foot. Liverpool had 17 attempts to Chelsea’s 10, however both sides recorded just two on target as the game hung in the balance.

Either team could have won it but with this being their fourth clash of the season, the element of surprise seemed to be missing as the two German coaches matched each other’s every move.

In the end, it was Jürgen Klopp who became the first ever German to lead his side to an FA Cup triumph as the Reds clinched it 6-5 on penalties.

Chelsea took first with Marcos Alonso scoring before James Milner levelled it in style. Chelsea’s skipper Cesar Azpilicueta hit the post from the spot and Sadio Mané had his penalty saved, leading to sudden death.

Alisson stopped Mason Mount from finding the back of the net as Liverpool’s substitute left back Tsimikas slotted home.

The win gives Klopp a coveted FA Cup trophy, the only silverware that eluded him in his tenure thus far.

It also keeps the Reds’ quadruple hopes alive with two games still to play in the title race and the Uefa Champions League final against Real Madrid two weeks away.