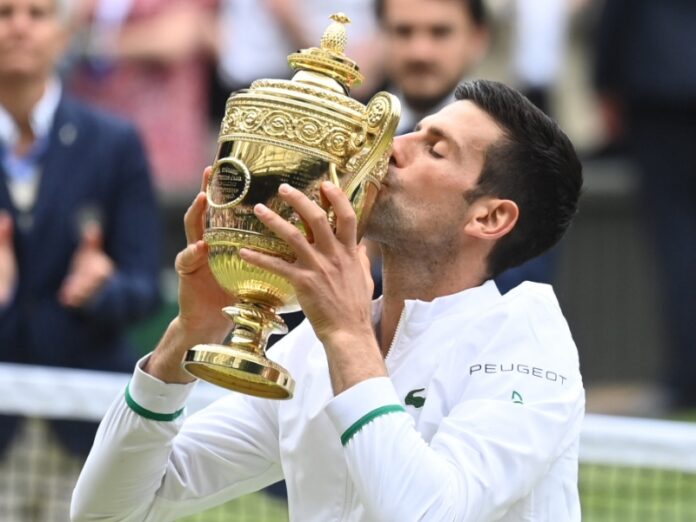 Novak Djokovic will be permitted to defend his Wimbledon crown this year after it was confirmed that unvaccinated players will be allowed to compete.

The Serbian was not allowed to compete in the Australian Open after he refused to reveal his vaccination status, an incident that led to his deportation.

He later admitted to lying on his travel document to gain entry to Australia.

The disgraced tennis star also attended a photoshoot in his native Serbia whilst positive with Covid-19.

However, the 34-year-old, who still refuses to reveal whether he has been vaccinated or not, will get the chance to compete at a Grand Slam.

All England Lawn Tennis Club chief executive Sally Bolton said the requirement set out by the government to enter the UK does not include mandatory vaccination.

“Therefore, while it is of course encouraged, it is not a condition of entry,” Bolton said.

Djokovic, who has 20 Grand Slam titles to his name, will be looking to surpass Rafael Nadal’s record of 21 titles.

The world number one’s refusal to reveal his vaccination status looked as if it would keep him from adding to his collection while Covid-19 remains a factor.

However, with several nations dropping vaccination requirements for entry, Djokovic will once again be able to compete on the main stage.

Djokovic would have wanted to be the first male to win 21 Grand Slams, but Nadal claimed that honour at the Australian Open.

Speaking after the tournament, Djokovic said he would rather miss out on titles and records if he was forced to be vaccinated in order to play.

However, with the Serbian set to play in the French Open as well as Wimbledon, the only Grand Slam that remains is the US Open.

Djokovic was not permitted to participate in the Indian Wells and Miami Open tournaments due to vaccination restrictions.

The tennis star has, however, not been in the best of form, only making it to his first final over the weekend, which he lost on home soil.

Wimbledon is set to run from 27 June until 10 July.