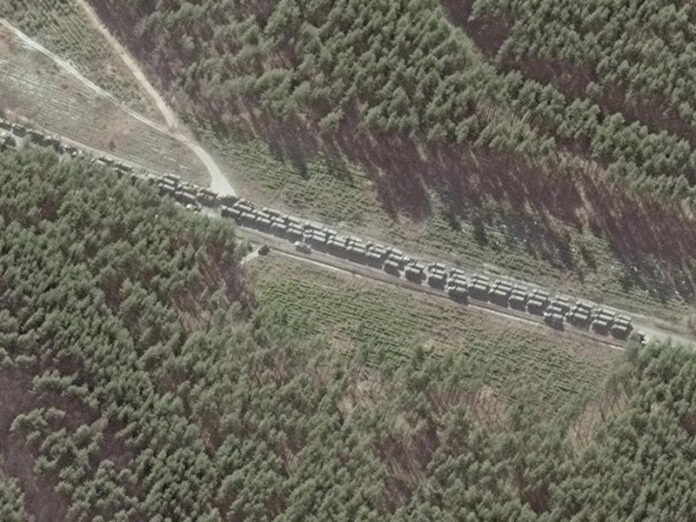 Satellite images show that a 60-kilometre-long column of Russian tanks and artillery vehicles is descending upon the Ukrainian capital of Kyiv, as Vladimir Putin’s forces step up their military campaign.

The convoy, which has made its way up from the southern Belarusian border, was only 28 kilometres outside of the city as of Monday night according to satellite company Maxar.

The situation in Ukraine’s capital – home to around three million people before the invasion – is already grave.

Long queues have been seen outside the city’s supermarkets as occupants brace themselves for food shortages.

Now military experts fear that the approaching convoy is large enough to lay siege to the city, and will be able to cut off key supply lines. This would open the door to widespread hunger and a shortage of medical supplies.

General Sir Richard Barrons, the co-chairman of Universal Defence and Security Solutions, said the convoy could either “lay siege to the city… or roll into it and apply all that firepower”.

With the invasion taking longer than initially anticipated, onlookers fear that Russia will unleash the full force of its non-nuclear arsenal on Ukraine’s towns and cities.

More than 70 Ukrainian soldiers were killed in artillery attacks on a military base in the city of Okhtyrka in the early hours of Tuesday.

The invading forces are even reported to have unleashed the notorious “vacuum bomb” on Monday, an extremely powerful weapon that ignites a fireball which sucks in all surrounding oxygen.