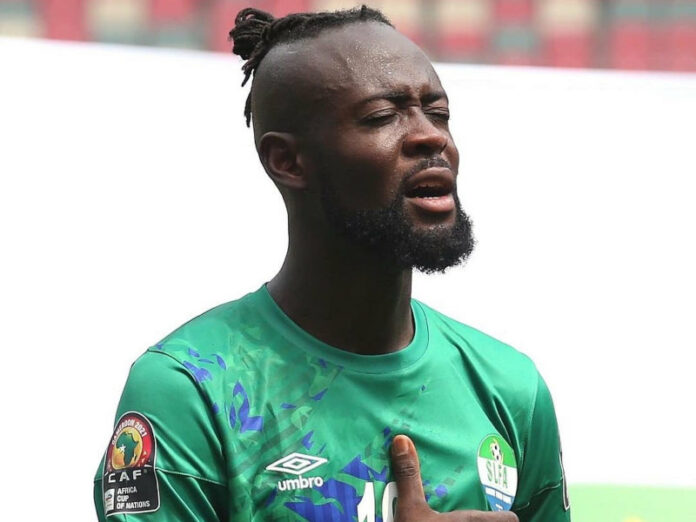 Kamara missed a crucial penalty in Sierra Leone’s 1-0 defeat to Equatorial Guinea in the last match of Group E.

Kamara’s miss wasn’t taken kindly by fans at home who took their disappointment out on the striker’s house.

Reports suggest that the mob stoned the house until the police arrived to stop further damage.

Losing to Equatorial Guinea brought an end to Leone Stars’ fairytale run in the 2021 Afcon. They had a great run after their 26-year absence from the tournament.

With their opening match they pulled off one of the great upsets of the tournament when they held defending champions Algeria to a goalless draw. They continued with their surprise charge when uin the match against Ivory Coast, another of Africa’s giants.

Sierra Leone scored late to force a 2-2 draw and earned themselves another vital point. A win on Thursday would have seen them leapfrog Equatorial Guinea to second and a spot in the knockout stages.

Equatorial Guinea had a dream of their own, knowing that a point or more would see them progress further in the tournament. Their dream became a reality with Kamara’s penalty miss as they joined Ivory Coast in the round of 16.

Some Sierra Leone’s fans sympathised with Kamara on social media reminding fans that it was  his goal against Benin in the qualifiers that led them to Cameroon.

Kamanda_Koroma said: “Why are stupid folks at Kei Kamara’s house? Why in the hell would they think that man did not want to score that penalty? People need to chill, for real.”

itsveebaby1 said: “Thank you Kei Kamara, We’re super proud of the team. After so many years we were seen, heard & talked about. A spectacular performance. It’s the will of God that it ended this way,”