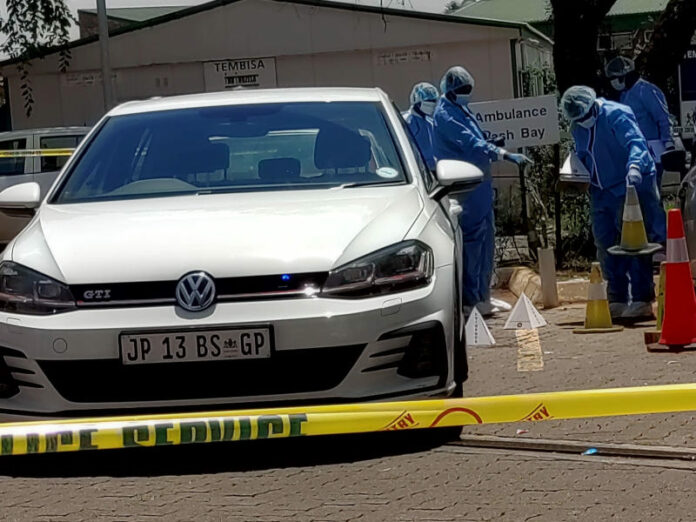 Driving a Golf GTI equipped with blue lights, the constable entered the premises of the Tembisa Hospital and parked in front of the offices where gender-based violence victims report their cases.

The suspect, a constable at the Ekurhuleni North District allegedly shot and killed a woman, then turned the gun on himself. The nurse on duty, believed to be his wife, died at the scene.

The cop, who shot himself in the head, was airlifted to the Milpark MediClinic where he is receiving treatment and remains in a critical condition.

The Tembisa Hospital temporarily closed its doors on Wednesday and asked members of the public to use alternative health care facilities.

In a statement Motalatale Modiba, Head of Communication at the Gauteng Department of Health confirmed the incident.

“The hospital remains inaccessible following a fatal shooting incident that has left both patients and staff members in shock,” said Modiba.

“Patients currently admitted at the facility continue to receive care. The public will be notified when the facility reopens later today.”

Modiba said just after 8am this morning, a 30-year-old police officer entered the hospital driving a state vehicle and parked at the Accident and Emergency Department’s parking lot.

“The man called his 30-year-old partner who was on duty to come to the parking lot. Upon arrival the police officer opened fire on the enrolled nursing assistant and then turned the gun on himself,” he added.

“Unfortunately, the nurse died on the scene while the police officer is currently in a critical condition.”

“She was dancing for us on Tuesday. She told me that I inspire her when wearing my skirt uniform,” said a colleague who did not want to be named, recounting her relationship with the slain nurse.

A work colleague said the nurse was like a sister to her.

“She told me her man was a bully and he was very possessive,” said the colleague.

She said the deceased and the cop have been together for about four years and have one child.