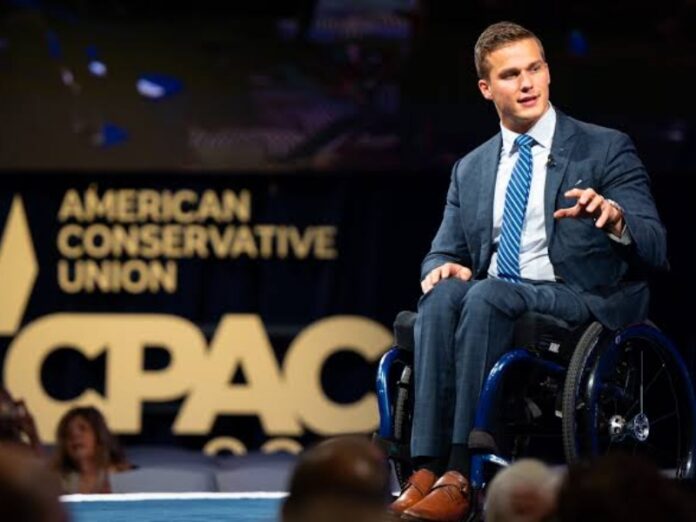 Meet Madison Cawthorn, the youngest member of the US Congress, aged just 26.

In his short political career, he’s managed a long list of distinguished achievements, including: repeatedly lying about his past, trying to take a loaded gun onto a plane (twice) and accusing his colleagues of hosting cocaine-fuelled sex parties.

Most recently, a video has emerged of a nude Cawthorn thrusting his groin into a man’s head.

In the tape, which was published on Wednesday night by American Muckrakers PAC, Cawthorn is seen shouting and chanting as he gyrates on top of another person in bed.

Meanwhile, someone behind the camera laughs and shouts at Cawthorn to “stick it in his face”.

“A new hit against me just dropped,” the congressman tweeted in the aftermath, explaining: “Years ago, in this video, I was being crass with a friend, trying to be funny.”

“I mean, being kind of a young guy in Washington, where the average age is probably 60 or 70 — you know, I look at all these people, a lot of them that I’ve always looked up to through my life, always paid attention to politics, guys that, you know. Then all of the sudden you get invited to, like, ‘Oh, hey, we’re going to have kind of a sexual get-together at one of our homes. You should come’,” he told the podcast host.

The party immediately shunned him for it, and weeks later pictures were leaked to Politico showing Cawthorn chugging wine while dressed in women’s lingerie.

But these are just the tip of Cawthorn’s achievements. He made headlines in March when he called Ukrainian president Volodymyr Zelensky a “thug” and accused Speaker of the House Nancy Pelosi of having “a drinking problem”.

But Cawthorn’s antics are not just isolated to making a fool of himself; his behaviour has often drifted into the dangerous.

He has been accused by several women of sexual misconduct, he’s been cited for driving without a licence on two occasions and he’s been stopped for speeding twice.

And, predictably, he’s a massive fan of Donald Trump.