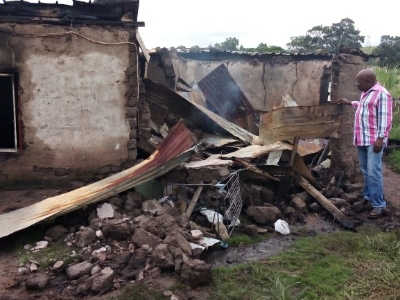 A 43-year-old man is on the run after narrowly escaping death at the hands of angry residents. The residents heard that he allegedly turned his niece, who is now nine years old,  into a sex slave and raped her for two years.

The man was beaten by Mpangeni residents on Friday. The community also chased his family members away, accusing them of allowing him to rape the young girl and not reporting the matter to the police.

The young girl’s agonising ordeal was exposed after Ward Councillor Sipho Ntombela informed social workers about the allegations against the uncle. She was taken to a doctor, who, according to the councillor, confirmed that she had been raped for a long time.

The girl said her uncle had been raping her since 2018 when she seven years.

The man’s family house was set on fire and he was beaten.

Ntombela said residents should have handed him over to the police whether he did this or not.

“No person is allowed to kill another person. The police must investigate.”

He said the girl’s family had many challenges including financial problems.

“It is difficult. I don’t know whether they knew that the uncle was raping the young girl or not.”

The girl’s mother died a long time ago, and she lived with her grandmother and other siblings.

The girl’s family declined to talk to Scrolla.Africa.

“We will deal with this,” said a family member before hanging up.

A neighbour, who spoke on condition of anonymity, alleged that the young girl’s ordeal had affected the way she socialised with other kids.

“We had always suspected that she was being abused. When she played with other children she would just start crying,” said the neighbour.

According to the crime statistics released by Police Minister Bheki Cele last month, more than 12,218 people were raped between October and December last year.