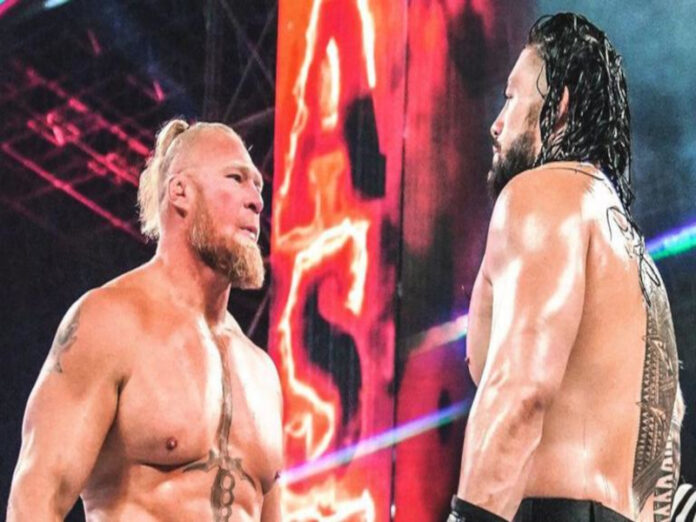 Both Roman Reigns and Brock Lesnar will go into the main event of WrestleMania as champions of their respective brands.

This comes after the WWE Elimination Chamber pay-per-view took place at the Jeddah Super Dome on Saturday.

The event was the first mainstream pay-per-view to ever take place in the Kingdom of Saudi Arabia and delivered some superb bouts. The show was also the last pay-per-view event before WrestleMania.

The action began with Roman Reigns defending his Universal Championship against the legendary Goldberg.

The champion of 534 days went stride for stride with Goldberg and despite being outclassed by the spear early on, he delivered a signature Superman Punch and locked in a Guillotine Choke to retain his title.

Bianca Belair went on to win the Women’s Elimination Chamber match to book her ticket to WrestleMania just a year after beating Sasha Banks in the main event on the grandest stage of all.

Belair will take on Becky Lynch barring any further changes on Monday Night Raw in weeks to come after The Man defeated Lita in a dream match.

Lynch always made it clear that Lita was her idol while growing up. For fans to witness her go head-to-head with her role model and then beat her, further helped to establish The Man as one of the best in the division.

The main event of the night saw Brock Lesnar come out on top yet again. After WWE champion Bobby Lashley was injured and had to undergo concussion protocol, the beast stepped in and wreaked havoc inside the chamber.

Rising star Austin Theory faced off with Lesnar as the final two went for the title. Ultimately, it was an F-5 from the top of the pod that put Theory away, an iconic moment that will set the standard for Elimination Chamber matches in future.

WrestleMania season continues with Raw and SmackDown on a weekly basis until the two-night extravaganza hits Dallas on the 9th and 10th of April.