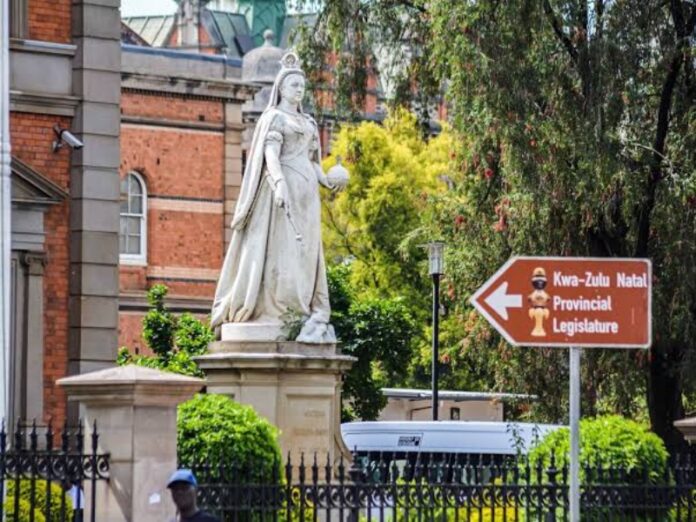 The Injeje yabeNguni council has called for the removal of the statues of Queen Victoria and Theophilus Shepstone in Pietermaritzburg because of their colonial pasts.

The Nguni organisation warned the provincial government that if it fails to remove the statues, they will set about toppling them themselves.

Queen Victoria ruled over Great Britain from 1837 to 1901. The British Empire grew immensely during her reign and she presided over the colonisation of indegenious peoples across the world.

Shepstone was a British South African statesman during the same period and has been accused by historians of promoting the invasion of the Zulu Kingdom by the British Empire.

The statues previously survived the violent removal of colonial statues by Fees Must Fall student activists in 2015. Then, the KwaZulu-Natal government opposed the protests.

They argued that removing the statues would erase the history of the country.

National Secretary of Injeje INduna Langalezwe Chonco has now said the statues represent a very painful history of the past that does not need to be displayed in any public place.

“The statues of Queen Victoria and her lackey Theo Shepstone that still remain standing at the KZN Legislature is an insult of the highest order to the Nguni people of the continent due to the genocidal terror, theft and corruption that Windsor unleashed on native peoples world over,” Chonco said.

“Those statues should be sold to the British government or to Rob Hersov,” said Chonco.

He said it was baffling that members of the KZN Legislature and government have remained silent and continue to host the State of Province Address under the eye of the Queen Victoria and Shepstone statues.

The Secretary of the KZN Legislature Nerusha Naidoo and Speaker Nontembeko Boyce said they haven’t received any formal complaints from Injeje yabeNguni about the statues.

“We haven’t received any communication or concerns from Injeje about the statues. Even our secretary of the Legislature never received anything, therefore no statue will fall on Thursday,” said Boyce.

Boyce added that the statues and the property on which they stand belong to Amfama, not the Legislature.

In 2015 many statues were destroyed and removed, including that of British mining mogul and white supremecist Cecil John Rhodes. The protests which began in SA then spread across the world.