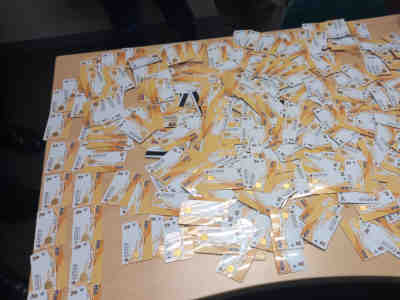 When he realised that cops were watching him, he dropped his sports bag and made a run for it.

But the man from Kagisanong, Mangaung in the Free State was caught and arrested when he couldn’t explain what 497 Sassa cards were doing in the bag.

This has been a breakthrough for the Mangaung police as the cards have been linked to the Post Office robbery last July in which 14,000 cards were stolen.

Police spokesperson Brigadier Motantsi Makhele said the Parkweg Tactical Response Team had received information and kept surveillance on a suspicious man who waited at the corner of Hills and Henry streets in Bloemfontein.

“Upon seeing the police, the suspect dropped the bag and tried to run away but was apprehended by members. The sports bag was searched and two boxes with Sassa Postbank cards were found.”

Last year, seven boxes with the Sassa cards that should have been delivered in KZN were stolen by four suspects who fled in a Toyota Avanza.

Sassa spokesperson Motshewa Maleka said they were pleased with the arrests.

The suspect will appear in the Bloemfontein Magistrate’s Court soon for possession of suspected stolen property.