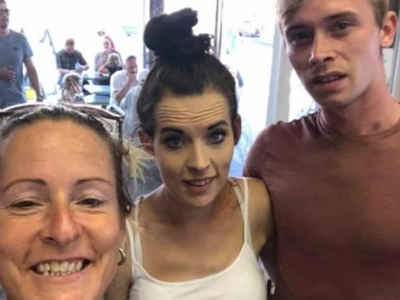 “It’s the ultimate betrayal,” said 24-year-old Jess Aldridge after her boyfriend ran away with her mother the day after she gave birth to their first son.

Jess, who is from the UK, told The Sun that her long-term boyfriend, Ryan Shelton, 29, began flirting with her mother, Georgina, shortly after the couple moved in with her.

They reportedly moved in together so Georgina, 44, and her husband, Eric, could help the young couple look after the newborn.

However, Georgina – instead of keeping an eye on their newborn – began to eye another household member.

Jess claims that when she returned from the hospital with her newborn son, Rheuben, in January, she was shocked to find that Georgina and Ryan had eloped together.

“It’s the ultimate betrayal. You expect a new grandmother to fall in love with the baby — not the father,” the young mother said.

“She is meant to be a granny to my two children and helping me look after them but instead she’s off sh***ing my boyfriend.”

Georgina was present at her grandson’s birth, but left to go home shortly afterwards, while Jess had not yet been discharged.

Hours later, Jess said that Ryan broke up with her via a series of text messages.

His reason? He was apparently sick of Jess’s accusations that he was having an affair with her mother.

He was seemingly so aggrieved by this “unfair”  treatment that he only saw his newborn son for a few minutes – while collecting his belongings to move in with Georgina.

“When I came home from the hospital all their things had gone. I knew Ryan would be with my mum but neither of them would admit it.

“Finally, the day after, he admitted they were in a relationship.

“My mum told me she can’t help who she falls in love with and Ryan told me the same thing.”

Sally Land, the Advice Page Editor at The Sun, wrote to Jess, “WHAT an awful betrayal by the two people who should be supporting you the most.”