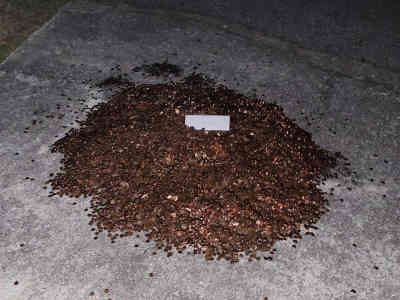 Andreas Flaten stepped out of his front door and found a pile of 90,000 coins dumped on his driveway.

When he and his girlfriend approached the pile, they found a note which read “F**k You!”, and when they picked up some of the coins, they found they had been coated in oil.

Flaten, who lives in the American state of Georgia, suspected immediately who the culprit of this elaborate stunt was.

He said he left his job at A OK Walker Autoworks in Peachtree City, Georgia in November but had difficulty getting his final payment of $915 (R13,500), even turning to the Georgia Department of Labour to receive help.

Flaten now spends hours cleaning the oil off of the penny coins.

“It took about about an hour and a half to clean a few hundred coins,” he said.

“That’s a lot of work for money I’ve already worked for,” he said.

Business owner, Miles Walker, told Atlanta’s WGCL-TV that he had no recollection of whether he dropped those coins off or not.

“It doesn’t matter. He got paid, that’s all that matters.”

Walker then called Flaten a weenie.

Flaten’s girlfriend, Olivia Oxley, said they were initially angered but have since made light of the stunt.

“After the first shovel full, all we could do was laugh because this poor miserable man took so much time to be vindictive and cruel. We absolutely refused to let him ruin a single moment of our day.”

The couple has discovered an added perk.

Oxley said: “With that many pennies, we’re bound to find a few treasures. I’ve already found one from 1937.”