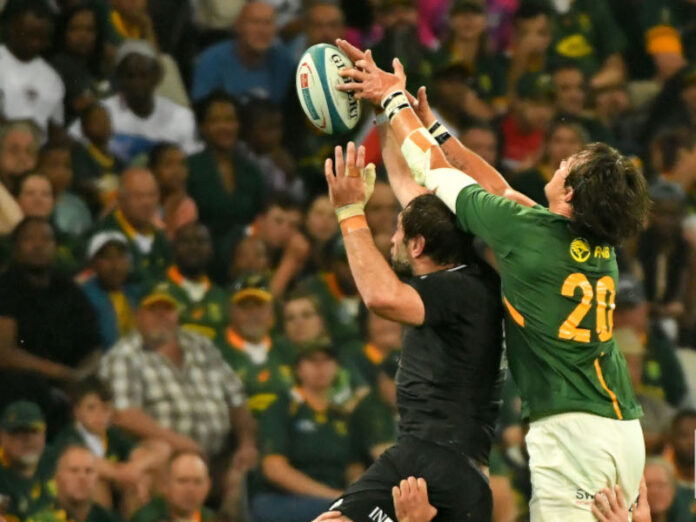 Before the match, it seems it might be the beauty versus the beast.  Can the beautiful All Black backline beat the beast that is the Springbok forward pack.

The first time Faf de Klerk gets the ball behind the maul, he plants his heel in the ground and kicks over the scrum. If it’s supposed to be a box kick it is way too long.

But then comes Faf’s injury after only 43 seconds. Not only serious for the team, but it is clearly a serious injury for Faf. Jaden Hendrikse comes on as Faf lies motionless on the field. Some minutes later Faf sits up. “Everything’s gonna be alright,” sings Bob Marley on the PA. A music selection somewhat in bad taste, but hopefully Faf will be alright as he is stretchered off.

Presumably Malcolm Marx has come into the starting line-up because it’s his 50th match, but his impact is immediate.

The All Blacks defend beautifully to stop tries, first on the left and then down the right, but after six minutes the Boks are knocking on the door. Hard.

And after eight minutes, Kurt-Lee Arendse scores a great try after good work from Lukhanyo Am. And, significantly, Pollard’s tough conversion kick is over.

In the next ten minutes the struggle is brutal and close to the scrum. When the All Blacks backs get the ball they are shut down immediately.

When a clearly wonky Faf de Klerk comes out of the tunnel to sit down with the players there is a spontaneous cheer from the crowd which Faf, ever the showman, acknowledges with a two-handed wave. A moment to remember.

A penalty at 21 minutes gives South Africa a well-deserved 10-0 lead.

Beauden Barrett’s run from his own try line hints at the genius of the man, and for a few seconds the All Blacks look good – but the attack ends in a forward pass.

At the 30 minute mark the All Blacks seem to click into gear, with Beauden Barrett leading the charge, and it’s an awesome sight. But once again they are forced into a mistake that gives possession to the Boks.

Remarkably, the Springboks concede their first penalty with 10 minutes to go to halftime, but quickly concede two more. With five minutes to halftime, Jordie Barrett’s penalty score means the All Blacks are within one score. New Zealand gets a scrum penalty totally against the run of play.

As the halftime whistle goes, Malcolm Marx has put in a man of the match performance. Will he be replaced for the second half?

Were the Boks slowing down? The second half will show.

Steven Kitshoff, on for Trevor Nyakane, immediately makes a difference. But the All Blacks, while not getting the better of the Boks, seem to have found an extra gear.

It is clear that Kwagga Smith, replacing Pieter-Steph du Toit, better live up to his label of “ball fetcher”.

Handré Pollard’s second penalty kick is much more of a tester but he gets the score. Springboks lead by 10.

Marx gets a standing ovation as he is replaced by Bongi Mbonambi. (He went on to get man of the match.)

Vincent Koch’s first contribution to the match is to concede a penalty that fortunately doesn’t cost points but the All Blacks are spending an awful lot of time in the Springboks’ red zone.

With ten minutes to go the All Blacks are attacking. If the Boks go into defence mode now that would be a mistake.

But then Pollard gets another penalty shot and, gratefully, the Boks take a 16 point lead.

When Kurt-Lee Arendse hits Beauden Barrett in the air, the ref has an easy decision: red card. But Arendse comes off worse from the tackle: he leaves the field on a stretcher.

Lukhanyo Am makes a glorious steal but he is left out to dry without support. Shannon Frizell scores a converted try, but Willie le Roux immediately picks up a loose ball and scores under the posts.